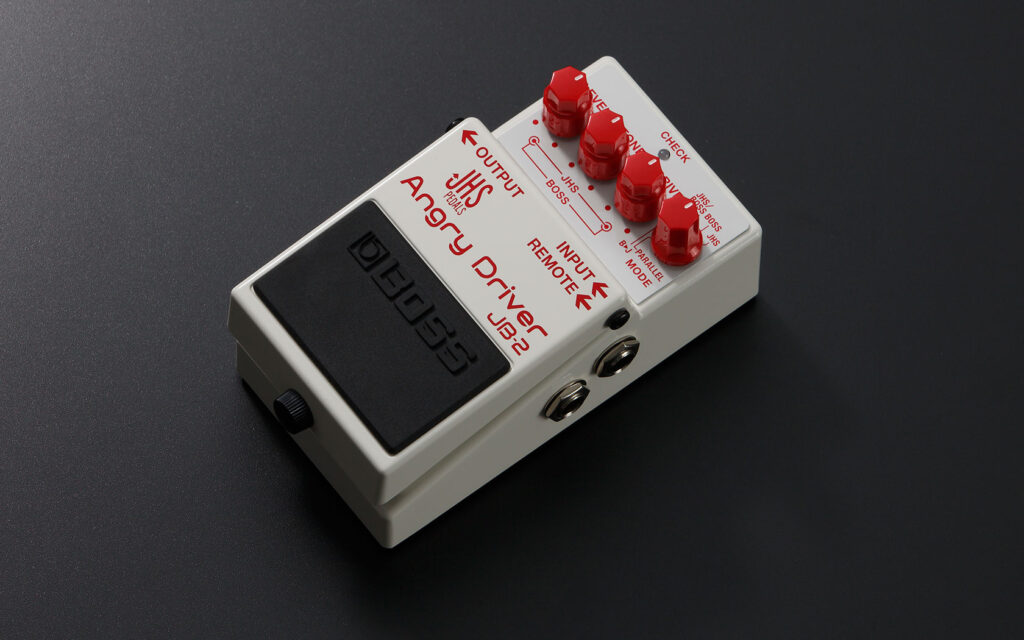 Sam Bell review The BOSS JB-2 Angry Driver—the first collaboration pedal that BOSS has ever done! Teaming up with JHS pedals to combine two of their best pedals into one sublime little unit; The JB-2 Angry Driver combines the JHS Angry Charlie from JHS and the BOSS BD-2 Blues Driver. Let's take a closer look.

BOSS pedals are no doubt one of the most well-known guitar pedal companies out there, their legacy needs no introduction, their lineage of instantly recognisable pedals, sounds and familiar consistent quality have made them one of the go to choices for all levels of Guitarist. Its no doubt that BOSS has influenced many other budding pedal companies over the years in their choices of effects and approach to design. One particular person they influenced was a dude by the name Josh Scott, Josh of course is the brain power behind the awesome pedal brand JHS pedals. He has been making some fantastic pedals for many years now which are incredibly popular with many professional players. Josh has a YouTube channel in which he talks about the history of pedals, brings in pedals from different brands and talks about their influence on Guitar Players and his own pedals as well. One video he has done on his YouTube channel is about how much of a ‘Fanboy’ of BOSS pedals he is. So to see that JHS has had a chance to hook up with Guitar Pedal Giant JHS is truly heart-warming and of course well deserved.

The pedal I’m looking at in this issue is one from my personal collection, the BOSS Angry Driver is a combination of two fantastic drive pedals. BOSS pedals own ‘Blues Driver’ and JHS’s own ‘Angry Charlie’ These two pedals are the staple drive sounds of Andy Timmons rig, and whilst this is not an Andy Timmons signature pedal (he has his own Angry Charlie with JHS) this unique unit from BOSS/JHS lets us get our hands on some incredibly tasty drive combinations or just by themselves. Lets take a deeper dive, and as ever, don’t forget to check out the video!

This pedal is very simple to use, on the far right of the pedal there is a mode control to switch it between, JHS only, Blues Drive only, Toggle between JHS/Blues Drive, JHS series into Blues, Blues Series into JHS and finally a parallel mode. The next set of knobs simply control the Level, Tone and Drive of each pedal, the larger and lower control for the Blues Drive and the smaller control on top of each knob for the JHS. Nice and simple! With an additional footswitch you can have further switching options (such as having it in Blues into JHS mode, using an external switch to take out the Blues so its just the JHS pedal etc). That’s the basic functionality. Its awesome to be able to use the drives in different combinations, the series modes allows us to ‘push’ one drive with the other for more gain/unique mid-range, and the parallel mode also allows for even further more detailed tone shaping.

So that’s all well and good, what about the sounds? So, the Blues Drive mode is of course modelled exactly on the classic BOSS Blues Drive. It’s a nice crunchy drive with a lot of upper mid range bite, traditionally it wasn’t very gainy, however over the years players have modified them for more gain. The Angry Driver version of the Blues drive is a little bit more like the tweaked version, leaving us with lots of room to play around. Andy Timmons has been said to use the Blues Driver for a broken up clean sound, which it does fantastically of course, he can also use it to push other pedals like a Tubescreamer would be used.

The JHS side of the pedal is of course modelled on the Angry Charlie. The Angry Charlie is like a JCM800 on steroids, with a nice smooth mid-range and depending on the tone setting, a lovely lower mid-range growl and tightness in response. This being said, as cliché as this may sound, and if Josh was to ever read this he would probably laugh! but despite how high gain it sounds and feels at more extreme settings, it does clean up nicely for that ‘transparent’ feel. Even when the drives are stacked, its possible to roll of the volume and get the lovely glassy detail of a crunchy rhythm/lead tone.

It’s quite clear to see that I am obviously a big fan of this pedal, its been in my rig for over a year now. I personally use it in toggle mode between the JHS/Blues, using the blues for a broken up clean and the JHS for all out shred. This pedal has been perfect on my board for shows where I borrow back line which is usually a clean Fender Twin style amp, and often I’m on in ears. With other drive pedals I’ve found no matter what I do its either too muddy and woolly or super brittle and harsh. But with the Angry Driver I’ve found a perfect go between; I can really shape my tone for modern/classic drive sounds. It made it possible!

I highly recommend this pedal for all modern Guitar players, it's super versatile, it can be powered by battery if need be, and its affordable. Go check one out, you won’t be disappointed!