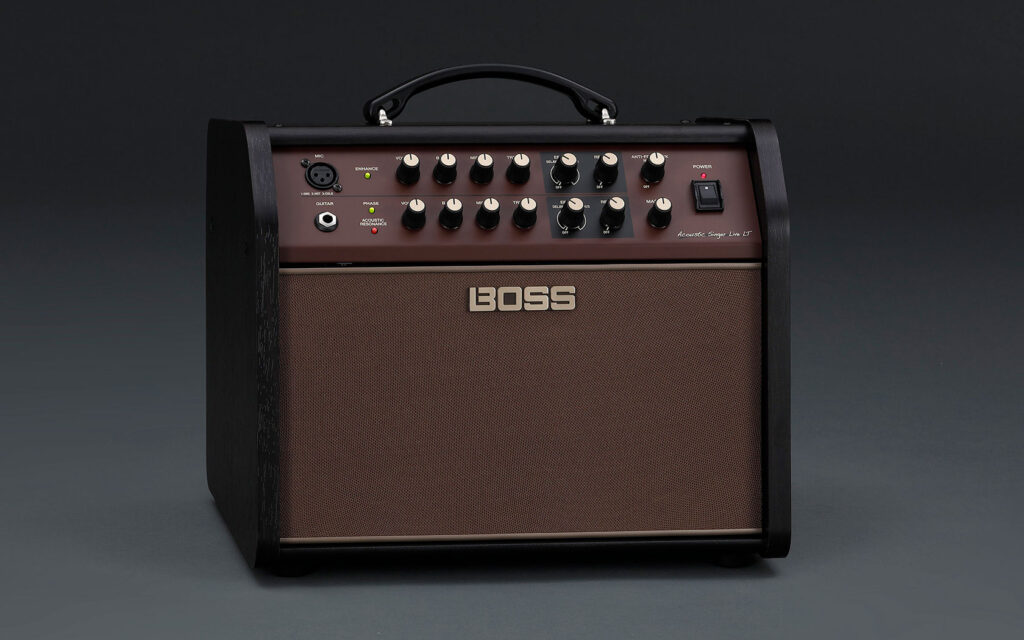 Not being at the mercy of the house engineer

With the new Acoustic Singer Live LT, Boss presents the most compact model of its popular acoustic guitar amplifier series yet. Designed for vocals and guitar, this amp contains two separately controllable channels, each equipped with a 3-band equaliser and reverb effect to give you everything you need to rock the stage. Nick Jennison tells us more.

The guitar is like an ecosystem. This is something electric guitar players understand very well indeed. Pedals, amps, guitar, strings, pick: all of these are part of the puzzle when it comes to both tone and feel. Plug most guitar players into an unfamiliar amp and they're unlikely to play their best (an experience touring musicians will be painfully aware of!).

We go to extreme lengths to optimise our gear for electric guitar, but when it comes to acoustic we're expected just to plug into whatever anonymous black DI box happens to be at the venue and play at our best with whatever sound is being fed back through the (likely ancient) stage monitors?

Your acoustic deserves better than that, and Boss's Acoustic Singer Live LT is a great solution to the problem. It's a compact and powerful two-channel amplifier designed for both vocals and acoustic guitar, but "amplifier" does it something of a disservice - it's more like a very portable PA system. It uses a full range, bi-amplified speaker configuration to reproduce the full range of both your acoustic guitar and your voice.

At 60w, it's a deceptively loud piece of kit - easily enough for small gigs like cafes, weddings, restaurants and even smaller bar gigs - and at just 10kg (a little under 23lb) it's a one-hand carry no matter how many flights of steps you have to climb at load-in. The control layout is simple enough, but with a few clever features that we'll get into a little later on. Both channels have volume, treble, middle and bass controls, along with foot-switchable effects for each channel. There's also a master volume and an "anti-feeback" control for notching out uncontrollable low frequencies from your guitar. There's an XLR output round the back for either recording or linking up to a bigger PA system, foot-switch jacks for both the vocal and guitar effects (which can be switched independently), as well as a 1/8" aux in for backing tracks and both 1'4" TRS and USB recording outputs.

Plugging our test guitar in, the Acoustic Singer Live LT reproduces the sound of the piezo pickup in a way that's somehow both accurate and flattering, with plenty of low-end authority and high-end sparkle. The magic really happens when you engage the "acoustic resonance" button though. This button gives you three different "body resonance" styles that immeasurably improve both the sound and playing feel of the guitar. Honestly, it's night and day, and I'm struggling to imagine why you'd ever want to turn it off!

Similarly, the vocal sound is warm, clear and immediate, and the "enhance" button adds some subtle compression while cleaning up some mud and adding a little top-end "sheen" - all things a great sound engineer will do to your vocal anyway. For singers with darker voices like myself, it's a blessing!

The effects section is super simple and easy to use, with two rotary knobs per channel - one for reverb and another for either delay/echo (vocal) or delay/chorus (guitar). Use the knob to dial in how much effect you want, and you're good to go! Both the reverb and effects on each channel can be foot-switched independently, allowing you to (for example) have the reverb on all the time while kicking on vocal delay and guitar chorus as needed, while still being able to turn the vocal reverb off to talk to the audience.

Boss's Acoustic Singer Live LT is compact, powerful and easy to use, and it has a bunch of tricks up its sleeve to make both your guitar and vocals sound their best. The "enhance" and "acoustic resonance" features really set it apart from the pack, and it's pretty affordable too! If you're a gigging acoustic player (regardless of whether or not you're a singer) you need to check it out.