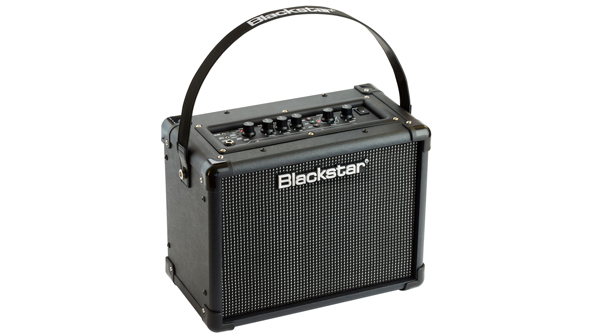 Small practice amps are all the rage at the moment. There are countless offerings around, tempting buyers with a huge variety of sounds and with many boasting new technology but, despite Blackstar being one of the biggest names in Ampland, it has have been conspicuously absent from the sharp end of this market. Until now, that is!  Brand new from Blackstar at this year's NAMM Show (and winner of a best in show award) is the ID:Core programmable series, which is an expansion to the ID range and comes in the form of 10, 20 and 40 Watt combos. We had two for test, the 20 and 40 Watt models. All three in the range are more or less identical, apart from their output, so we were happy with that as a representative sample.

The first thing I need to say about these new amps is that they are stereo. No, better make that STEREO. 'Super wide stereo' Blackstar calls it and it's a fair description - more of which anon! The 10 features two 3” speakers, the 20 has a pair of 5” speakers, while the 40 comes with two 6 1/2” speakers and they are powered so that they offer 2x5Watt, 2x10 Watt and 2x20 Watt output.

This is an impressive start to a line of amps in the “affordable” range but that's all it is - a start. Blackstar has piled the features on, including a whole host of sounds and effects built in. These include: clean, bright clean, crunch, super crunch, distortion 1 and distortion 2, all controlled via the 'Voice' knob. Once you've set the voice you want, you then get to choose your effects, which include; reverb, delay, chorus, tremolo and modulation.

Want yet more to play with? Well, there's an mp3 line-in, so you can jam along to your favourite tracks, an emulated line-out that also works as a headphone socket, a USB connection so you can record direct and up-date the onboard software, as well as a footswitch (which unfortunately didn’t come supplied with our units), plus Gain, Volume and EQ controls.

This EQ control uses something Blackstar call I.S.F., which apparently stands for 'Infinite Shape Feature'. Blackstar claims it allows you to go from “USA – British sounds” in an instant.” Quite what these “sounds” are I will leave you to make up your own mind about but essentially I.S.F does away with the conventional Bass, Middle, Treble controls and combines them all in one. When you move the knob the whole tone stack response (ie bass, middle, treble) is moved. This control allows you to infinitely adjust the response of the tone control network between any of the traditional voicings, allowing you to design your own sound in a very quick and effective way.

Is it good? Yes it is. The I.S.F control offers a great variety of familiar tones that you would be used to and it does so instantly. Players who really like to fiddle and fine tune their sound will miss the individual EQ controls, but those of us that just want to plug-in, play and quickly find a sound that they like will love it. The different voices available are excellent. From super clean to full-on saturated distortion.

Generally speaking, it's hard to get good clean tones from small solid state amps like these, but Blackstar has achieved it, helped, no doubt, by the presence of super wide stereo, which really works very well. The crunch and distortion sounds were as you would expected from Blackstar; well defined, clear and even at full gain neither mushy nor muddy - which is pretty much what you would expect after all, as this is Blackstar's home turf and what the company is best known for. That said, the addition of usable clean tones couldn't have been taken for granted and it's good to find that Blackstar hasn't ignored these.

The effects, too, are excellent - especially the delay, once again helped by the stereo set-up. A long delay mixed with huge reverb will give you hours of fun and the feeling that you are playing in a deserted cathedral. Once again, the ID:Cores offer the user so many possibilities, plus the ability to mix multiple effects together and even a Tap tempo, which means you can also store up to six presets once you have dialled in your perfect sounds.

Finally (as if that wasn't enough!) the combos also come with free 'Insider Software' which, installed on your computer, gives you more deep editing of your amp, exchanging sounds with the Blackstar online community and downloading artist patches, all for free.

When you look at the spec sheet for the ID:Core series and then look at the prices, it's hard to believe that Blackstar is able to offer such complete packaged without having cut some corners. However, I'm very happy to report that they certainly haven’t! The build quality is top notch, the tones full bodied and usable, with excellent authentic sounding effects plus modern features such as I.S.F and Insider Software.

Blackstar has pitched these amps as starter and practice products, but I think they could have a lot more uses then sitting in the corner of a teenager's bedroom. You could easily gig with the 40 Watt model going through a decent PA, while the 10 Watt is ideal for busking, and the 20 will make a great little jam/recording amp if you can’t be bothered lugging all your usual gear around with you.

But for me it's the stereo sound really makes these amps, and at these prices, rival manufactures should be feeling a little scared...