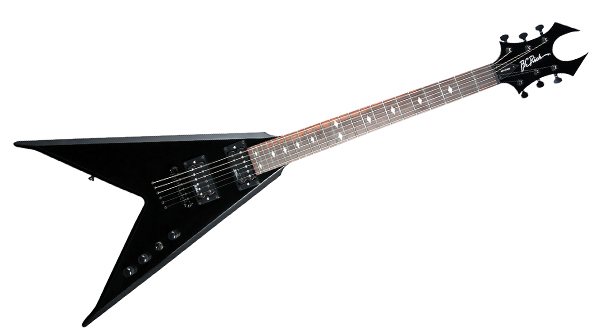 BC Rich is the most visually distinctive brand in Heavy Metal guitar design. Used and abused by a selection of some of Metal's greatest guitar players, they’re still the guitar icon of choice for many teenage Metal guitarists despite a decline in their popularity since their '80’s heyday. BC Rich has clearly recognised that it has a strong following among younger guitarists, as the company's output over the last decade has predominantly been targeted at the low-to-mid price range with just a few high end models released to satisfy more experienced players and prove that they still have what it takes to hang with the big boys of Metal guitar design.

The new JRV Edge is the latest affordable BC Rich guitar, but it’s really just a subtle reimagining of the classic JRV. I must confess that as a teenager I always wanted to own a BC Rich V-shape guitar but never had the pleasure, so I was excited to finally test drive a guitar that was one of my early fantasy instruments.

Unboxing the guitar, it was immediately obvious what I was dealing with; nothing screams heavy Metal like a BC Rich! One of my favourite things about all the company’s designs is its unashamed commitment to heavy music and the imagery that goes along with it; while many comparable brands have mellowed over the years and followed trends to make visually more mainstream instruments, BC Rich has bucked the trend and if anything made their guitars progressively more evil-looking as time has passed!

I also strung the guitar with heavier gauge strings and tuned it down to C standard tuning, where the pickups remained articulate and handled the extreme lows with palm muting well. The BDSMs performed averagely with clean tones, but anyone who’s planning to play clean for any serious length of time is probably looking at the wrong guitar here anyway; while not a highlight, the tones were passable and certainly usable in an emergency.

So far so good for the JRV then, but unfortunately there were just a couple of niggles I had with it that stopped it from being the perfect, affordable V-shape guitar. The first is the black satin bevels applied to the otherwise gloss-finished body; they were practically invisible from a short distance away and served very little purpose. Obviously this is a subjective opinion, but to me it just feels like BC Rich needlessly adding an uninspiring finish to distinguish the guitar from previous JRVs.

There were more practical issues with the design as well. The wings were slightly thinner than on other V-shape guitars, and whilst the added pointiness does make this guitar visually the most Metal of all Vs, it also makes it the most difficult to play whilst seated. The guitar had a tendency to feel top heavy and slip out of my legs, and was just generally more awkward than most to adjust to; the thinner top wing also meant my picking hand had to adjust its angle slightly to accommodate the odd resting place of my forearm.

Other annoyances included the placement of the volume pots; each pickup has its own knob, but for some reason BC Rich has decided to place the neck pickups control in the prime, easily reachable top spot. The crucial bridge volume pot, which most Metal players are constantly turning on and off to avoid unwanted feedback between songs, is in an awkward spot behind the pickups selector which is difficult to reach. Of course, you could turn the neck volume off and use the selector switch to cut the signal, but that’s no use if you want to use the neck pickup during solos as many players do.

Criticising a V-shape guitar for practicality feels a bit like I’m missing the point though. If you’re thinking of getting this instrument I doubt you’re too concerned about playing posture whilst seated! There is nothing more Metal than an all-black BC Rich JRV, with the possible exception of some of their other designs, and while players of a more technical nature may find other guitars in the BC Rich line more ergonomic, staunch defenders of the faith will find there’s nothing more Metal than shredding it up on stage with one of these in their hands.