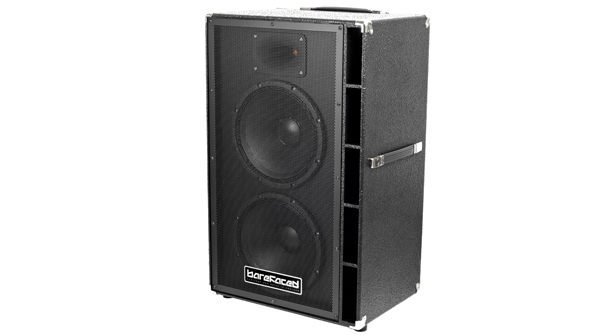 Based in Brighton, on the sunny south coast of England, Barefaced  Bass is a relatively new company on the block and one with an interesting story. It has evolved over the last few years from early cabinet designs that were born out of lengthy discussions on Internet forums. I actually recall those forum threads clearly, including the very first post from the company owner Alex Claber, who was posting about his first bass cabinet now known as 'The Big One'. It used the very best components available at the time to create a speaker cabinet that put sound quality, volume and performance first. That must have been in around 2008. Now, seven years later, not only is 'The Big One' up to generation three in the guise of the Big Twin II we have here, but the whole Barefaced cabinet range has grown considerably following the surging demand for Alex's products.

It was time to take a look at what has turned so many bass players on to Barefaced's designs, so we borrowed a pair to get a sample of what's on offer.

First up, the Retro Two 10. On the face of it, looks a lot like many other bass cabinets featuring two 10” speakers but there's a lot going on inside that cool exterior! I don't profess to have the knowledge Alex Claber does when it comes to the lengthy mathematical equations of cabinet design and speaker parameters, therefore I will attempt to describe some of the key points in layman's terms at least!

Behind the black steel kick grill are two custom '10CR250' 10” speakers designed by Alex. The drivers have been modelled to be 'retro sounding' hence the name but, these ferrite magnet units also have the ability (unlike those cool sounding old vintage speakers) to move a great deal more air.  There's no tweeter in these cabinets, but these 10” speakers have an extended high frequency response too. The idea being that these cabinets will take drive and distortion and reproduce it pleasingly, rather than via tweeters that can sound shrill in this situation. That's not all though. With a clean signal, they will still be able to deliver clarity and suitable low end too.

The Retro cabinet is 'ported', which is good news as I prefer ported cabinets usually - but this little fella is different. It features what is known as a 'hybrid resonator'. As I understand it, most ports are only capable of being tuned to one frequency but the system employed here is tuned to two and has been voiced specifically in order to bump the upper mid range but at the same time tailor the bottom end too. The net result is a cabinet with a flavour it impresses on your bass tone to flatter it rather than muddy it.

The more you look into speaker designs, the more you find. For example, it turns out that using multiple speakers running a full range signal arranged in a horizontal plain isn't the most efficient way of getting your audio out to everyone across room. The two (or more) speakers can interfere with each other causing midrange and top end dispersion problems. So how does Barefaced go about fixing this problem? Well Alex says that both speakers in the Retro do work in unison to deliver low end and low mid range frequencies, but by using a 'line array' crossover design, only one speaker delivers the treble output, much like a modern PA system does. You can actually hear this when you put your ear up against the speakers (watch the volume). Our studio was probably a bit on the small side to test the theory at distance but at a close range, the cabinet on review sounded nice and clear out front anyway. Certainly no lack of clarity in our studio space. Further reading: “Line Arrays” (if he starts on about cylindrical wave theory, he's fired - Ed)

The Retro Two 10 comes in a 4 ohm version and a 12 ohm version. The latter gives you the option of using three as a stack to make a modular 6x10, 4x10, 2x10 option without overloading a standard amplifier. Speaking of which, there is a 6x10 version of the Retro Two 10 in the range if that takes your fancy!

The Retro range is finished in a tolex covering, chromed metal corners and strap handles. The cabinets themselves feature an advanced bracing system and dual-density super light but very strong ply wood to make for a practically resonance free box with thin walls to keep weight to a minimum.

The Big Twin 2 is surely the flagship of the Barefaced line with a completely different model ethos to that of the Retro line of cabinets. Quite the opposite end of the spectrum but again, very much encompassing Alex's original plan for the 'Big One'.

“Maximum Tone, Maximum Output and Minimum Weight, in that order ...”

You can think of this cabinet as being the equivalent to a high quality PA cabinet with the ability to bring the lows and subs to the party. Indeed, I sat playing CDs through this very cabinet and was astonished at how good it sounds considering it's directed primarily at a bass guitarist. Such a success have the Big Twin and the smaller Big Baby cabinets been that Barefaced has started building active PA cabinets based on these models! I can understand that totally now that I've heard the Big Twin II.

The 'Big' range has been crafted to meet exacting criteria - some points of which are more in depth than this review needs to go - but Alex and his team have made all those details available on their website. Draw up a chair and enjoy with a coffee. Not many companies are willing to go in to such detail of cabinet design!

Once again, the drivers on board the Big Twin are custom rather than 'off the shelf' types and of the high displacement variety and are every bit premium. The wide dispersion tweeter at the top of the cabinet (where it should be frankly) doesn't just handle the sizzling top end, but it connects with the upper mid range of the 12” drivers, offering a seamless crossover between the two. There are many cabinets I've owned where the tweeter output actually sounds separated from that of the woofers. You'll be surprised how much of your sound has been missing when you can finally hear it again. Round the back, the Big Twin 2 features two combo connectors and there is also a control for an interactive crossover feeding both the 12” cones and tweeter unit. It doesn't just attenuate the top end for the tweeter but is said to actually move some of those top end frequencies back toward the 12” cones instead, which changes the character of the cabinet. Useful for when using bass distortion for example. Anyone plugging a distortion pedal directly in to a PA system will know that it's a harsh sound even for top quality tweeters.

The Big Twin, instead of Tolex, goes for a road ready painted on hard wearing textured surface much the same as that used on tour grade PA. It's glossy and I like it!

Also round the back (and not that this cabinet weighing in at just over 20Kgs needs it), is a pair of edge mounted wheels so you can manoeuvre the Big Twin across smooth floors and carpets with ease. I'd suggest not taking it for an outing on your gravel drive though! Lifting with the side handles is as easy as carrying a feather duvet in comparison to the 45Kg cabinets I used to drag around! I did note that if your hands are icy cold, you'll notice that textured finish on your fingers if you grab the cabinet a bit quickly and scrape your knuckles!

Summing up, the Retro Two 10 is a cool cabinet and the modular approach will certainly appeal to those who might want to be able to resize their cabinet needs depending on gig but retain the same sound wherever they play. By that of course I mean, looking for that more classic, pleasing warm bass guitar cabinet tone whose colour adds to that of the instrument.

The Big Twin on the other hand is just extraordinary. A 'one cab solution' that sounds superb. For my instruments that I often tune down to F# below the B of a 5-string bass, I need a cabinet that is able to produce a balanced sound that doesn't give in when I push the lows. Clarity with those tunings is paramount especially around the stage. The Big Twin has demonstrated that it is more than capable of delivering this.

I have been looking for a bass cabinet that would be perfect for PA and FRFR type applications too and this could well be the end of the search. The Big Twin 2 cabinet is a very capable piece of kit and I would urge you to try one out. On that subject, although Barefaced do not have many stockists of their products, they do offer a 'buy it direct' one month quibble free test drive on the complete range. That's confidence in a product I feel.

Overall? This is connoisseur class gear for players who can tell the difference. You simply cannot compare these enclosures with the built-to-a-price offerings from non-specialists and you can't expect to pay ordinary prices for them, either. But if you're the sort of player who has sought out a specialist bass and knows exactly the sound you want, then we can't recommend Barefaced Audio's approach highly enough. Take your time, read all the material on the website, talk to them. This is about as good as it gets and, for the prices asked, we actually think they're good value for money. Put a big brand label on the front and they'd sell for a lot more!