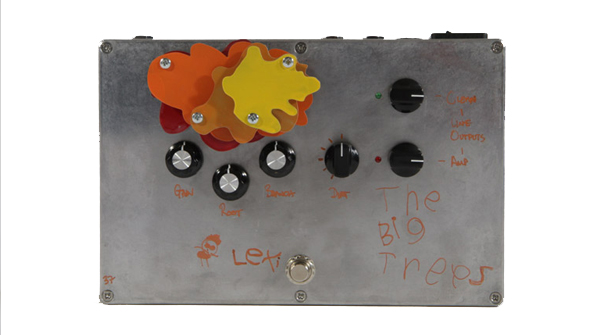 Audio Kitchen's Steve Crow is a one-off and his idiosyncratic pro-class amps are starting to gain  'must have' status - particularly for recording. But even we were taken aback when the Big Trees arrived. Is it a pedal? Is it an amp? Is it even finished? We handed it to our resident lover of the arcane, Michael Casswell, and let him figure it out.

Audio Kitchen is a small London-based company, run by audiophile engineer Steve Crow, that concentrates on making hand-built amps in small numbers for players who have 'tone' at the top of the agenda. If you take a peek at the company's website ( www.audiokitchen.co.uk ), you'll see that, though their amps look satisfyingly retro, they are all pretty much recognisable as amps. The Big Trees isn't so much. It's a bare metal box sporting chunky controls and is covered in fairly childlike writing. This isn't a bad thing but it is an acquired taste and though some will absolutely love the look, others might wonder, to put it politely, what the hell is going on. Only you can decide which of those two camps you're in!

The specs say it's an all-valve unit, delivering 2.5 Watts from single ended class A output stage. There are ECC83 and ECC82 pre-amp valves and a single EL84 output valve. So at the very least you have a low powered practice or recording amp, which enables you to torment either the pre-amp valves, or the output valves, or both, to achieve some great old school valve tone that can only really come from valves doing their thing. Because it only pumps out 2.5 Watts, you can get it all cooking at reasonable volume. Just plug your guitar in, connect to the speaker cab of your choice, and turn up the gain. I connected it to half my Marshall 4x12 cab loaded with original Ipswich Celestion Vintage 30s, and 2.5 Watts suddenly seemed quite loud! The speaker out in the Big Trees offers a nominal 8 Ohms. Next to the gain pot you have the 'root' and 'branch' pots, which is a nice tree friendly way of saying bottom and top!

But just when you thought you had it all worked out as a super-quality hand-made, recording amp, you have to take on board that the Big Trees can also be used as a stomp box that you can take a line out from and plug straight into the front of your favourite amp, letting it act like a boutique pre-amp or overdrive pedal. Doing this lets you create another level of tone and gain, depending on what amp you are using, complimented by the fact that you have foot switchable clean and dirty channels within the pedal.

You could also use the Big Trees to drive the front end of your pedal board, or get your other pedals to drive the Big Trees -  it all depends what you are using it in conjunction with. If I was running delays and reverbs, the Big Trees would go before them into a clean amp. If I used a compressor, I would put the Big Tress after it in the chain. If your rig seems a bit lifeless and lacking those magic valve overtones, then using the Big Trees in its pedal guise could warm everything up nicely. The line output is running with valve line driver circuitry, which gives it a bit of an advantage over your stock boutique overdrive pedal.

The onboard Baxandall based EQ does nice things when pushing the gain on the pedal. It acts almost like another gain stage. There is a pot called 'dirt' which acts like the EL84 headroom control, so when you turn this up, the volume decreases but gives you more output gain distortion. You are actually decreasing the headroom of the EL84 output valve, driving it harder, therefore giving you more dirt to play with. Looked at this way, the unit is a lesson, in pre-amp distortion, power amp distortion, and combinations of both.

So it's an amp! It's a pedal! What else can it do? Well in an age of digital recording and guitar speaker emulated guitar sounds, it has found a home with some big names using it to 're amp' recorded guitar sounds. This is a little trick that can add beef and realism to a lifeless guitar track. Speaker emulation has got very good nowadays, but it is still not a loud valve amp, mic'd in a nice room with a Shure SM57 stuck close to the speaker, which is moving air. The Big Trees would be great for re-amping, and in an article in a recording magazine recently, it was revealed that a little known band called Led Zeppelin recently benefited from an Audio Kitchen amp being used to re-amp some of the channels from their live appearance at the O2 in London. Although I didn't have time to test it out myself, I just know the Big Trees would shine at this.

So it's a very cool piece of kit that is for guitarists in search of good tone and valve response. If I had to play devil's advocate, then I'd say it's not cheap. If your gear seriously lacks mojo, then yes the Big Trees will inject life where there wasn't any. Or, alternatively, you could invest in better gear! Or simply you could up your game so that your tone is in your hands rather than expensive guitars and amps. It's all subjective. You are paying for a hand built product that will give you that all valve mojo, good after sales service and a product that has more than one use.

The Audio Kitchen guys know what they are doing and the company's products have gained a lot of high profile users, particularly among some of the younger bands mentioned on the website, who tend to be hungrier for new ideas than the old school. Hunt down an Audio Kitchen Big Trees amp, pre-amp, re-amper and see and hear for yourself what valve tone can do for mere mortals.