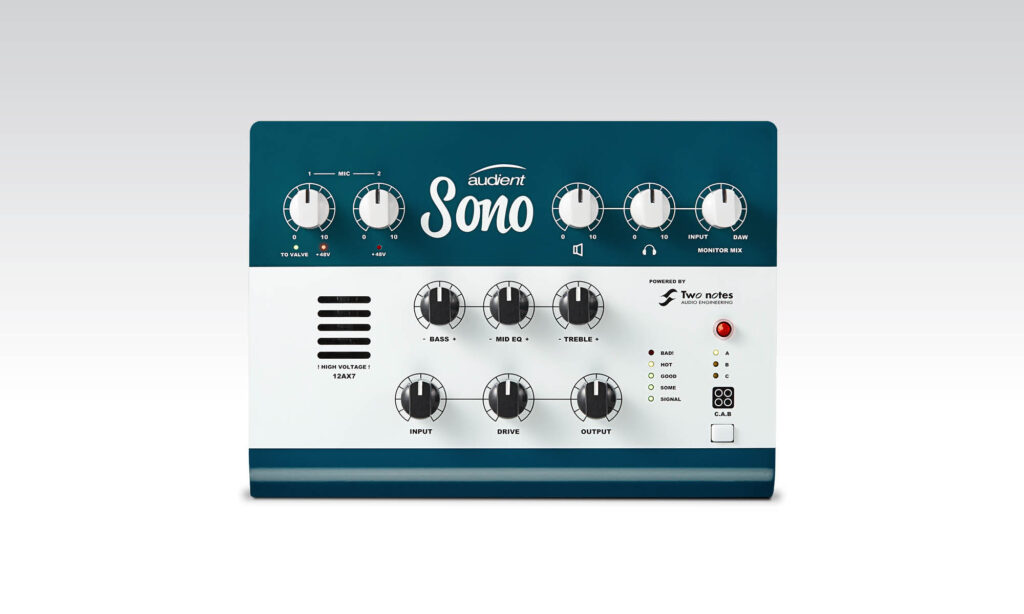 The Sono also features a dedicated amp out. This has two functions: monitoring through your fa-vourite valve amp, but also for re-amping.

Record using your pedals straight into the interface.

Very low latency with the onboard DSP.

Not bus powered - but what did you expect with a valve preamp?

Audient’s Sono is tailor-made for the recording guitarist, marrying a 12AX7-fueled preamp with a top-shelf power amp and cabinet simulation from Two Notes, along with a 3-band EQ and powerful re-amping capabilities. Sono isn’t just for guitarists, however—it’s also a feature-packed USB audio interface. Here's Nick Jennison to tell us more.

When it comes to recording, there’s never been a better time to be a guitarist than now. We live in a world where there are a whole plethora of great amp software amp sims and modellers so we can go without our loud valve amps, and if we just can’t bear to be without them there’s also a wealth of load boxes to bring our amps to heel.

There’s still one part of the chain that has remained somewhat dispassionate to the needs of the guitar player, however - the audio interface. Let’s be clear: the majority of interfaces out there certainly aren’t “guitarist-unfriendly” - indeed, almost any modern interface with a Hi-Z input will get the job done. But until now, there haven’t been any pro level interfaces designed with guitarist’s needs in mind.

Enter the Audient Sono - a collaboration between highly respected UK audio company Audient and French cab modelling masters Two Notes. On the surface, it’s a two input (expandable to ten) USB2 interface with a dedicated low-impedance input for guitars. Pretty ordinary, right? Not in the slightest. It also features a high-voltage 12AX7 preamp, along with a three-band tone stack - basically, the front end of a valve amp. As for the poweramp and speakers, that’s handled by Two Notes' incredible Torpedo software. This has a number of important implications for guitarists.

First of all, if you’re a pedal user, you can plug your board directly into the Sono and use it just like you’d use a clean amp. The 12AX7 can be used to gently warm up your signal, or you can push it in a gentle, crispy breakup. It’s not going to give you burning metal tones, but it’ll take your high gain pedals beautifully. You can also print the EQ, poweramp and cab modelling direct to your DAW - just like you would with a traditional mic’d amp. If you want to use your own amp, that’s also very easy. You can bypass the valve preamp entirely, and run from a preamp pedal or your amp’s FX send straight into the Two Notes poweramp and cab modelling, or use a product like a Torpedo Captor to load your amp down and use just the cab models.

Now, you may be asking “why would I bother using the cab models on the amp when I can just use the software version in my DAW?”. Well, there are two reasons. First of all, the latency - or lack thereof. Guitarists are hyper-sensitive to latency when tracking, and the onboard DSP has a latency so low as to be imperceptible - under 3ms roundtrip running at 96kHz with the Torpedo processing, 0.3ms without it. Second, tracking with the onboard modelling takes the strain of running the (rather CPU-intensive) cab and poweramp modelling away from your computer. In a modern project with dozens and dozens of guitar layers, this is invaluable.

The Sono also features a dedicated amp out. This has two functions: monitoring through your fa-vourite valve amp, but also for re-amping. You could easily plug into the Sono’s guitar input and record a clean DI track, while running through the “amp out” to your favourite valve amp, mic’d using the XLR input on the Sono’s second channel. If you hate the mic’d tone, it’s trivially easy to send the clean DI back out to your amp and re-record the same performance with a different mic position, or different settings on the amp. If you love it, you still have a clean DI track that makes editing so much easier.

The cab and poweramp sims are edited using the bundled Torpedo Remote software, allowing you to experiment with cabs, mics and mic positions, power valve types and different virtual recording spaces. You can also buy new cabs from the Two Notes store directly in the app. You can save three presets directly to the Sono, and you don’t even need a computer connected to the Sono to use them. You could take the Sono out to your gig and use it to go directly to the front of the house, for example.

As well as the remarkable feature set for guitarists, it’s important not to overlook the power of having a valve mic preamp direct in your interface. Input 1’s XLR in can be routed via the 12AX7 to warm up any source, but it’s particularly good on vocals where a bit on an “edge” is required. Of course, if you want a clean and uncoloured mic preamp, it’s as simple as taking the valve out of the signal path with a press of a button, or using input 2 - either will give you results as clean as a whistle.

The Audient Sono is a well thought out, feature-rich interface that’s perfect for the recording guitarist. Factor in the superb Torpedo modelling and low latency and you have an interface that’s genuinely very exciting. 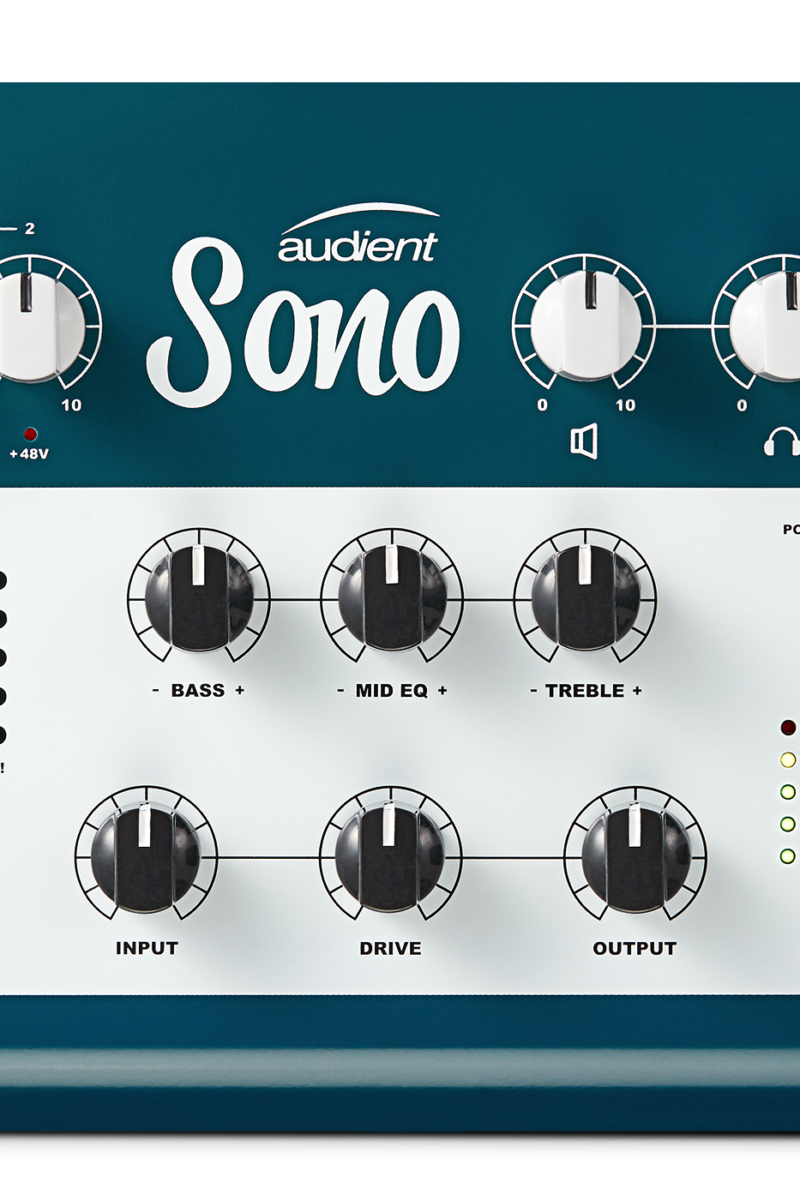 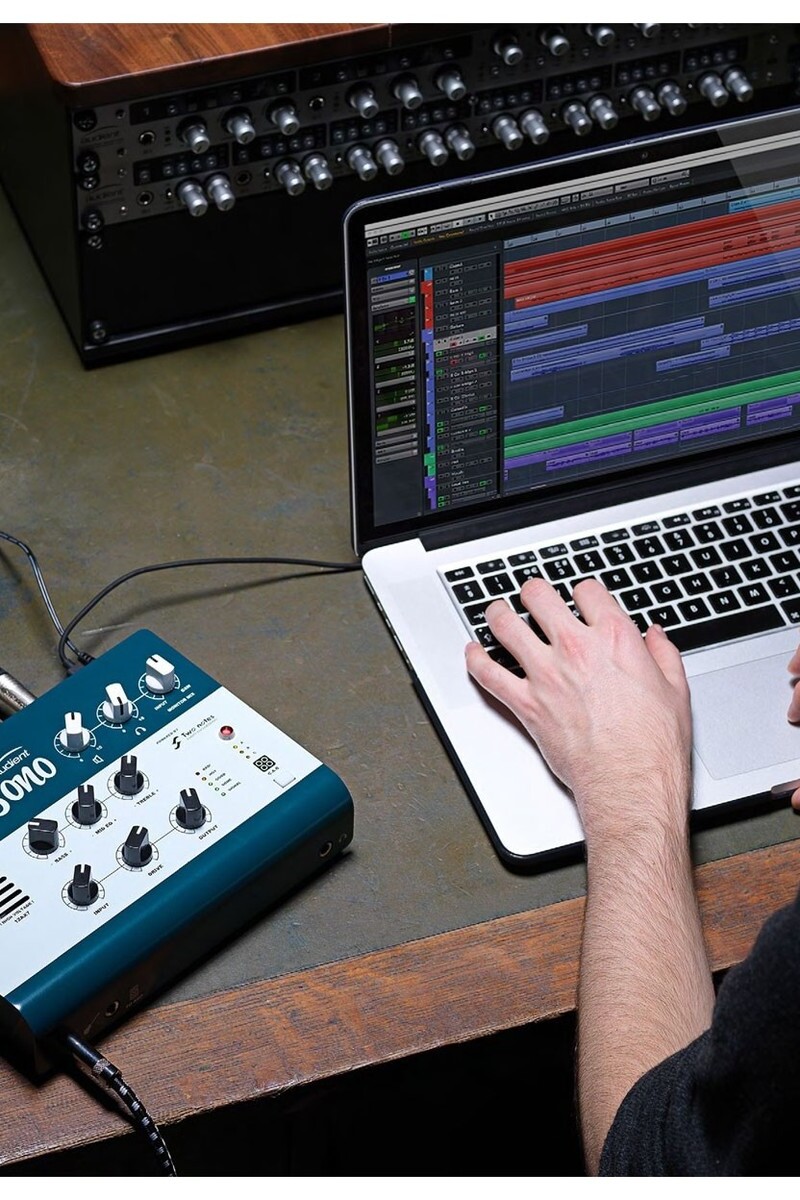