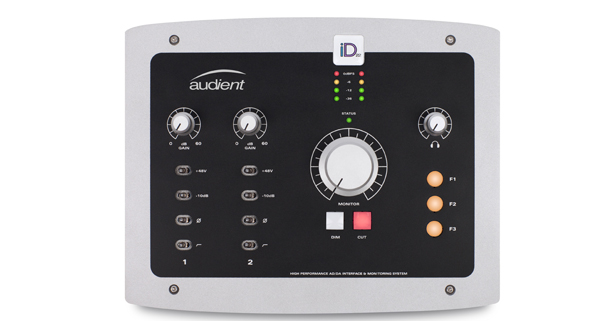 Audient’s iD22 is a desktop format audio interface with a built-in monitor controller. Downloading and installing the driver interface took a couple of minutes and then the unit connected to my 64 bit Windows 8.1 DAW first time and performed a quick firmware update. Whilst it did that, I hooked up a set of monitors and my studio headphones and had a play.

Connections are on the rear panel, with combi sockets (proper Neutrik ones) for the mic and line level inputs, plus a ¼ inch jack instrument DI for channel 2. Two pairs of balanced line-out TRS connectors give monitor 1 and 2 outputs, and you also get send/return balanced IO pairs for each audio channel plus one headphone socket and optical IO for stereo S/PDIF or up to 8 channels of ADAT (at sample rates up to 48K, 4 channels for higher rates). An unsecured power inlet for the external switch-mode supply (no buss power) and the USB socket complete the back panel, and the only other hole in the all metal chassis is the Kingston security lock socket on the left side panel.

Once connected, you can control the iD22 from the top panel or from the on-screen interface. The simple and nicely spaced top panel has gain knobs for both pre-amp channels and individual toggle switches for phantom power, -10dB pad, polarity reverse and 12dB per octave low-cut filter at 100Hz. To the right of the channel control is the monitor section, with a large monitor level control, a 4 LED ladder meter showing -36, -12, -6 and 0 dBFS,  DIM and CUT buttons, a headphone level knob, and three assignable function keys.

In use, the metal case is heavy enough to sit where you place it and not drag under the weight of the attached cables; the various level controls are nicely weighted and don’t easily knock out of position, and their aluminium  knobs are both attractive and clearly marked. I thought the toggle switches were a bit stiff but they’ll probably loosen with time, and in fairness, once you’ve set one it’s going to stay put until you deliberately change it again. Switch labels are all clearly marked, and because there’s plenty of room on the top panel they are all easy to read in use. With a microphone connected I struggled for a moment to figure out how to assign the ladder meter to one of the input channels; and found that you can’t. The meter is an output-bus meter only, inputs are included in the comprehensive software display, but as the physical box is so easy to use it seems a shame to not have even a clip warning LED.

OK then, while the control panel’s open, let’s see what else it does. Split into three sections, the right side covers routing and presets where you can assign analogue and digital inputs to outputs, select digital format, clock source, trim the levels of the dedicated DIM button and your alt speaker selection, chose which speaker(s) to use to play a mono image and assign talkback to input one or two (no built-in TB mic, you have to use one of your channels).

The Left hand side has your level meters and faders for analogue, digital and DAW channels, and channel solo, mute and pan buttons and a scribble strip for labelling, and in the centre “Master” section are the monitor sections controls, and one of the mysteries of the iD22.  Around the level knob are buttons for features that can be assigned to the three function buttons on the hardware unit, these are sum-to-mono, polarity, talkback, and alt speaker selection, as well as dedicated DIM and CUT buttons. Count them, that’s four assignable features, and three hardware buttons. If there were twenty options and three buttons I’d kind of get it, but choose three out of four? As it happens, in my set-up I don’t need talk-back, so that was actually an easy choice. If you do set up TB, the assigned hardware button will act as a momentary (non-latching) button for a long press, and latch for a short press - very clever. Also clever: use sum-to-mono and polarity reverse together and you get to monitor the sides-only signal!

Once all that’s done, what does it sound like? Let’s start by bearing in mind that the pre-amps are the same as those in the Audient ASP8024 console, and then just jump straight in and say that the iD22 sounds brilliant. Most interfaces these days have really very good pres and converters (and honestly, the difference between the kit that you get in your interface and the top-dollar exotics is much less than most people imagine), but the iD22 is very, very nice indeed.  I tried the pre-amps into my usual interface (using a lead from the channel send socket (bypassing the id22 converters) and also an external pre into the iD (into the channel return) and came to the conclusion that both pres and converters are playing a very serious game here. Pushed hard, the pres saturate very nicely, and have a very slightly euphoric sound that I loved, and the JFET DI on channel 2 is very good too.

There’s always a list of extra bits any one of us would like to see (without upping the price of course): some may want more headphone sockets or more complex monitor control, or a built-in talk-back mic, some will struggle without input metering or agonise over those three assignable buttons, but I think I can overlook any of that for the sound. Even better, the manual is well written and detailed too! Audient has managed something a bit special with this one.

Pristine sound, easy to use, great value for money, very nicely made and strongly recommended!