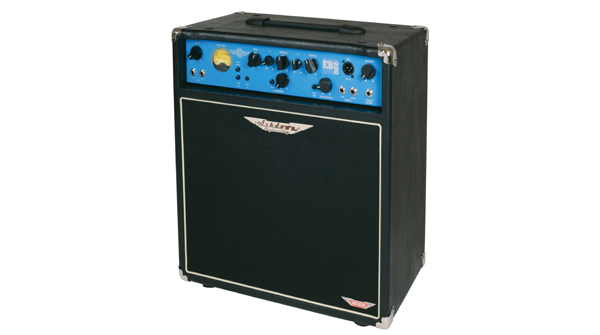 Although it seems like it has been around forever, Ashdown Engineering's highly regarded bass amps have only been with us since 1997 - but what a reputation the company has gathered since then! With a roster of users that includes the likes of Guy Pratt, Pino Palladino, Brian Marshall, Nate Mendel, James Lomenzo and Norman Watt-Roy, to name just a small handful, you can see why that distinctive Ashdown style is so visible on stages around the world.

The company may be best known for its full-sized Pro rigs, but for most players, something more modest is called for and Ashdown has a great reputation here, too. In the case of the review sample we were sent, an EB LITE 15-220, it delivers Ashdown's blend of feature rich amplification and tone, but in a smaller and lighter combo ideal for the upwardly mobile musician.

This model and its little brother that features a 12" speaker in place of the 15" driver featured here, both have a 220W power amplifier strapped to the now familiar looking EVO pre-amplifier. The EVO has been updated over the years and the current incarnation is this, a series III model.

The front panel layout is dead easy to get to grips with. I might sound a bit boring, but I do like gear that is familiar and easy to understand - without having to spend hours with a manual. Well, who wants to trawl through pages of text anyway, we want to turn on, plug in and rock out! The EB isn't going to cause any problems there then.

Left hand side, plug in with either of two inputs - one is 'padded', which will help match levels if you are finding you have an instrument with a high output that is distorting the pre-amp. Next to that, providing  visual indication of your levels through the system, is the now legendary back-lit Ashdown analogue 'VU' meter. A really nice touch - that classic styling always works with me. Dead centre of the front panel is Ashdown's graphic equaliser -  a novel approach to making things as easy as possible to understand. Three large knobs for basic Bass, Middle and Treble adjustments then the inclusion of two smaller knobs for fine-tuning those in-between frequencies. Most of the time it's fine to leave them zeroed, as the amplifier has a nice rounded tone straight off  the bat, but it's certainly a nice addition without making the front panel too fussy.

Further equalisation comes in the form of a 'bright' switch for added top end zing and 'deep' switch that adds extended girth in the low-end. I usually go for this button on smaller combos to add a bit of depth whilst leaving the EQ flat. It works well on this amplifier too. Moving along, there are a number of useful connections included - a balanced D/I output for connection to P.A or recording devices, as well as an effects loop for your line-level signal processing (such as a rack mount effects unit). There is a tuner output for connecting your tuner too, that can also be used as a line out to other devices as well.

Ashdown has gone to its usual lengths to provide useful on board processing too in the form of a simple 'one-knob' compressor that has a pleasing 'squishy' sound when maxed out but also useful dynamics control on lower settings. Let's not forget the other expected inclusion on the EVO heads too, the sub-harmonics control. An effects that adds, as it describes in the manual, 'sub-harmonics an octave below the notes being played'. The level control interacts with the bass EQ control to add a thickening to your bass tone. Effective, though you may find it unnecessary if like me, you favour low tunings.

The combo has a punchy sound as you'd expect from the smaller sized cabinet that favours the low-mid bass frequencies - this is no bad thing as 'cutting through the mix', bass players usually also favour those mid frequencies. Ashdown uses its own speakers and this is a Blueline unit that appears throughout the bass gear ranges. It is a 'high performance model' that Ashdown describe as having 'exceptional attack and low-end performance'. It does indeed go loud and we managed  good volumes before things started sounding a bit ugly in the studio.

Finishing off the box is a tough vinyl and metal corners - The whole combo coming in at a very acceptable 23Kg according to the website specifications.

This is a well-priced, nicely made, highly gigable workhorse combo that won't break the bank and won't break your back, either. For club and pub gigs, rehearsals, Ashdown join the ranks of the back friendly combo amp manufacturers and thus should easily be on your shopping list.