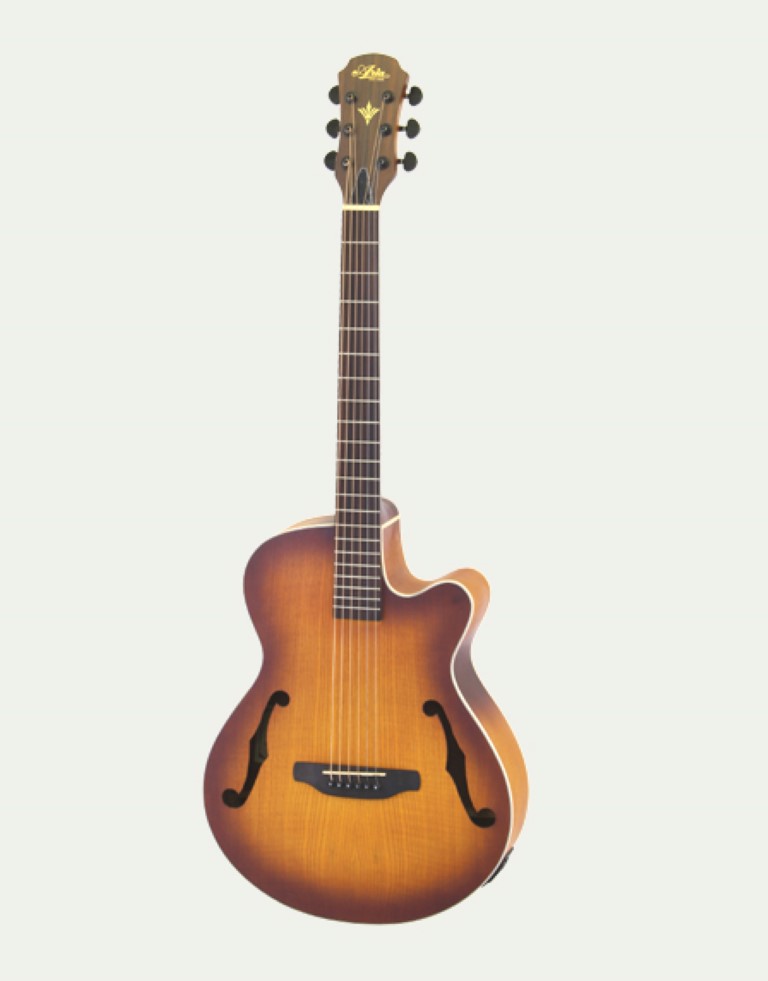 Aria has had a storming year with us at GI. The company has sent us a succession of guitars that have really impressed us, proving that the Japanese company that virtually wrote the book on affordable high quality guitars is still on top form.

Aria has had a storming year with us at GI. The company has sent us a succession of guitars that have really impressed us, proving that the Japanese company that virtually wrote the book on affordable high quality guitars is still on top form. That said, the new – and yet visually vintage styled - FET-F1 N is something very different indeed. We gave it to our resident Jazzer, Lewis Turner, to see what he made of a distinctive archtop style newcomer.

I have reviewed a few Aria guitars here at GI in the past and have always been pleasantly surprised by them in terms of build and tonal quality at a great price. For those of you aren’t familiar with them, here is a little recap. Aria was established in Nagoya, Japan in 1956 by Shiro Arai. As an accomplished classical guitarist Shiro had difficulty obtaining gut strings for his guitar and started to import nylon strings made by Augustine in New York. Word quickly spread among fellow players and students and a business of musical instrument manufacturing and supply was born, making Aria one of the pioneering brands in Japanese guitar making. Now, like everyone else, Aria produces in Japan, Korea, Spain, Indonesia and China but the company still does things a bit differently to most of its rivals as this very distinctive newcomer certainly shows!

The FET-FIN features a flamed nato top with an open-pore finish, the sides and back also being nato, this is a good looking instrument with the double F holes giving it a clear nod to an archtop type guitar. A brief inspection confirmed what I have become to expect from Aria - a top finish and attention to detail throughout. The 21 fret nato neck with rosewood fingerboard was an absolute pleasure to play. At this price range we quite often find acoustic guitars with high action, fret buzzing and poor intonation, but I am happy to report that there were no such problems with the Aria. The neck size was very similar to that of an electric guitar, making things very easy going, which is ideal for a beginner or younger player. Although to be fair, just because of the price this really shouldn’t be considered a “beginners guitar”.

This instrument plays amazingly well and Aria has clearly designed the playability around the style and the type of player this guitar will probably attract. Quick complex Jazz chord changes are easy to pull off and lead playing all over the fretboard was a total breeze (maybe this is how it got its F1 name?) helped by the cutaway giving better upper fret access. The wood quality may not be the finest, delivering a slightly thin sound (though that is also partly down to the thin body size) but for the price it’s a good option and won't leave you disappointed. All the notes rang clear including individual notes in a chord, nothing ever sounded muddy or lost in the mix. The guitar resonated well, generating workable acoustic volume for its size and good dynamic range. By the way, it's also worth mentioning that the bridge is made of the same wood as the fretboard. Overall, the set-up on this guitar was perfect, providing great tuning stability and intonation throughout.

As mentioned above this is an electro acoustic, well that's what I'm classing it as, but with the styling it does fall somewhere in between electric and acoustic. Still, let's not get too caught up in the details, it is essentially an acoustic guitar with a pickup and pre-amp built in. This model uses an Aria designed AEQ-4 pre-amp and piezo pickup with a four band EQ and built in tuner. I hate to keep on about the price, but once again this is above and beyond what you might expect in this range. The tuner was clear and precise, and the EQ controls all worked well. Overall sound quality when plugged in, again, was good, if perhaps a little thin, (that could be down to the issues discussed above) but there were no problems with feedback or over compression.

In conclusion, the Aria FET-F1N is a great guitar that encourages you to play, it was so effortless and rewarding that I really didn’t want to put it down. Freddy Green fans out there will love the styling, and Jazz guitar players that want an easy to play acoustic will find this perfect. It won't do the sit around the campfire singalong role very well, as the sound is a little thin and lacking in volume, but who wants to be that guy that brings an acoustic to a party anyway? Not me! This one looks like another winner from Aria and a very unusual guitar without many competitors – certainly not in this price range!