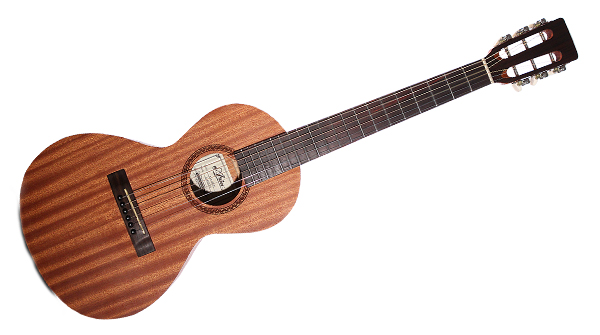 Travel guitars are a great idea, especially in these days of strict airline rules on cabin baggage sizes and weights, which mean guitar players frequently have to fight to get their beloved instrument onto the plane with them instead of at the mercy of an unscrupulous baggage handler. Whilst the concept has been around for quite some time now, there have been very few aesthetically and tonally pleasing examples, with the results often being either too ugly or too boxy sounding to really be worth your time. Aria are looking to fix these issues with their diminutive ASA 18H Parlour guitar, combining classic good looks with as much tone as you can squeeze out of its tiny body.

There’s no denying that the ASA 18H is a looker thanks to the traditional slotted headstock and beautiful clear, satin finished wood. The body is constructed from sapelli (or sapele, if you prefer), an alternative to the more expensive mahogany more normally used in this type of guitar. The top is also sapelli, giving the guitar a unified and classy look with a distinct but subtle dark grain running throughout and a lovely tobacco colour, matching beautifully with the rosewood fingerboard. The neck is constructed from nato, a common choice on acoustics in this price range, and looks great too with its slotted headstock and vintage, open gear tuners. Aria’s decision to leave the fretboard free from inlays is a good one too, giving a clean look that could have become cluttered with this size of guitar. The design is finished with a burnt in rosette that is cost effective and pretty, plus an intonated bridge saddle for great intonation across the range of the guitar.

Internally and externally the ASA 18H is a very well made guitar that feels both solid and cared for in the construction process. The inside of the review sample was clean and precise with the same attention paid to the external finishing on the neck and body with no rough sanding or fretwork to speak of. The design has resulted in a very pretty guitar that benefits from the wider bout at the back of the body and feels very comfortable in a sitting position without feeling like the size of the guitar is diminishing its playability in any way. In many ways, these travel sized guitars are easier to play and you’ll find yourself playing chordal parts that would seem far harder on a longer scale length instrument and the Aria is no exception.

In general, playability was very good on this guitar with a good factory setup offering a sensible compromise between playing ease and tonal quality. Moving around the range of the neck there were no dead spots or untoward buzzing noises to speak of and tuning stability was solid and reliable. The tuners did their job well and didn’t feel overly stiff, which can sometimes be a problem in this price range, whilst having enough resistance to enable accurate placement.

Tonally the ASA 18H will never be able to compete with bigger bodied 'Parlour' guitars but, considering its size, it is an admirable performer, matching its good looks with a bold and ambitious tone for such a small guitar. The attack is very piano like across the range and responds well dynamically to a range of techniques without ever sounding like a budget instrument. The only thing missing is a warm bottom end to the frequency range but this simply cannot be achieved with such a body size and the tone is loud enough and bright enough to be heard for campfire sing alongs or impromptu acoustic jams with enough depth to work well miked-up in a studio. It has a unique tone all of its own once miked that should be considered not as a replacement for a traditional acoustic but rather an interesting sound that could sit alongside an acoustic in the studio and offer something different. For travellers, its intended market, the ASA 18H offers an attractive package that finally combines a good looking guitar with a decent tone that isn’t overly boxy or mid rangy complete with a travelling bag, perfect for the back of the car or the overhead bin on an aeroplane.

At this price point there isn’t anything really negative to say about the Aria ASA 18H. For the cost of some ‘beginner’ guitars this is a very capable performer with solid wood construction and a very pleasing look that is perfect for travellers or those looking for a small bodied bargain. If you can find one it comes highly recommended.