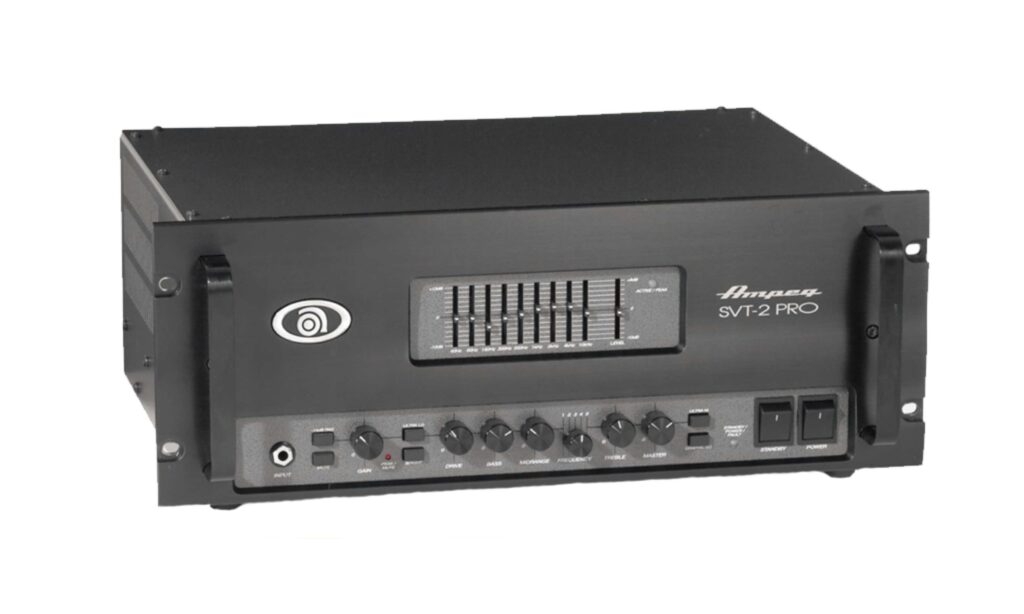 Although many other brands have tried to capture the classic all-tube bass sound of the 1960s and '70s Ampeg bass heads, not many can arguably hold a candle to the SVT. That harmonically rich sound and legendary performance of the Ampeg SVT was redefined in the SVT-2PRO, delivering 300 watts RMS of unsurpassed quality, reliability and tonal flexibility, and features a vast array of contemporary enhancements. Dan Veall tells us more about the Ampeg SVT 2 Pro Amplifier.

I can't think of a "big rig" that I saw more times on stage growing up than the iconic Ampeg SVT and 810 cabinet combination. Some of my favourite bassists used these and have endorsed the brand for many years.

No longer in manufacture, but surely this combination can be considered a modern classic. So, here's the SVT 2 Pro in for a closer look.

This absolute beast of an amplifier features no less that 14 Valves in its signal path. Six big 6550 valves help to deliver 300W RMS of power in to a 4 or 2 ohm load. But, oh beware! In this modern age of D Class heads developing 1200W of output - the numbers dwarf merely numerically. I had actually forgotten how deep and loud the SVT 2 Pro can be when it's turned up. We've paired it with a modern, clear sounding 'neo' cabinet for the 4x10" experience and the results in the studio were pretty epic if I am honest with you.

The preamplifier of the Ampeg SVT 2 Pro is laid out somewhat deceptively. Having the graphic equaliser set away from the rest of the controls splits the head up in to "feature areas" and to my mind looks less complicated than some other heads with lots of icons and busy looking lay out. Tidy, sleek and oozing authority with its mixture of 'Hammerite' paintwork and brushed metal panels. It doesn't need the bright gaudy lights to get noticed, it has done its tenure on stages the world throughout and is respected.

Across the front panel, we have controls for gain and drive. Both of these work interactively taking the valve preamplifier from a deep clean tone with lots of girth to a gritty and angry mid-present valve distortion.

The 'tone controls' onboard even without the extensive graphic equaliserengaged forms a large part of the SVT sound, especially as the midrange frequency can be switched in 5 frequency steps depending on where you need your adjustments to take place. I preferred the 220hz position as there's a lot of important 4 string bass frequencies available around the 100-400hz region. Watch that bass control though as it reaches low! Treble adjustment and a pair of top-end boost switches are super useful for shaping bite, clarity and harmonics of your instrument, or pull them back for an old-school rumble.  The Ultra Low as it happens, is almost a go-to if you want a deep, "subby" bass sound, as it scoops out mid-range too thus boosting low end perception.

The graphic equaliser, which features nine bands of cut and boost is, to me well thought out. The 90, 180, 300 and 500hz bands are often the ones I mostly need for shaping. You could, of course, set up the equaliser like a second channel as it can be switched in, like the mute function via externally connected footswitch.

Incidentally, for the purists out there, according to the schematic diagram I have, it seems that although the graphic equaliser is solid-state and has no valves in it's signal path, when it is switched out, it is truly bypassed, removed from the path entirely.

Round the back, there's all the useful connections we need to hook up to cabinets or front of house for performance. This version of the SVT 2 Pro has the added Speakon style connector, whereas my earlier "black face" SVT 2 Pro I owned many years ago only had the 1/4" jack sockets for speakers. I much prefer the inclusion of Speakons for many reasons. (Do not use instrument cables for speaker outputs and vice versa!)

Effects loop and the ability to daisy chain SVT amplifiers using the "Preamplifier output / Power amplifier" input jacks can be useful for the odd stadium gig!!!!

Of course, check out my video for some close-ups of those glorious valves - it almost seems a shame to hide them away inside a massive steel case, then wrapped in a rack case, but this amplifier was always designed to have a bullet-proof shell for the rigours of the road.

The SVT 2 is unfortunately by today's standards a heavy ole beast. When bassists are throwing 200W amps that fit in their back pocket into their gig bags, before hopping on the bus for an afternoon club gig, the SVT 2 Pro has had to sit it out. Sadly it seems the SVT 2 Pro has been and will continue to be out of production, and this is possibly one reason.

That said, this is an amplifier that, having been away from for so many years and to have an opportunity to really crank up and breathe some fire into speakers - was a very pleasing, exciting, nay, thrilling experience. And you know what? It ended up coming home with me too.