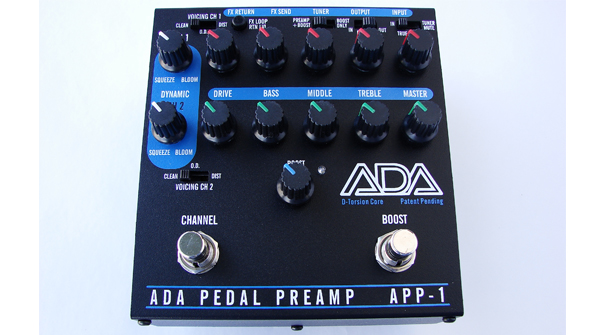 Dave Tarnowski formed A/DA back in early 1987 after working for Seamoon, designing and working on high quality effects units such as the Funk Box, Studio Phase and the Controlled Tone pre-amp. In 1976, Seamoon was experiencing financial difficulties and Tarnowski bought up its existing inventory and formed A/DA, producing pedals with features that were unique for the time, such as a flanger with a 40:1 ratio and a phase pedal with built in distortion circuit for added flexibility.

Eventually the pedal range was discontinued to make way for sophisticated digital delay rack units and switching pre-amps such as the MP-1 that became a staple in many rack systems during the '80s and '90s.

The APP-1 presents a return to the pre-amp market for A/DA and also has a few unique features thrown in for good measure. Designed in pedal form (rack systems have been out of fashion, though there's a sense the tide is starting to turn again - Ed), the APP-1 is an all analogue unit that is really three devices in one - a clean to high-gain two-channel pre-amp, a dual buffer for your effects and a final signal boost for soloing or overdriving your power amp. Both channels can be voiced for anything from crystal cleans to high gain distortions and are designed using Tarnowski's 'D-Tortion' technology that is supposed to give a much greater level of dynamic and overdrive control, from pick attack and volume changes, without the need for tubes.

A dynamic control allows the user to select the level of the dynamic variance in almost the same way that keyboard players can alter their velocity response, giving a huge range of control over the feel of this pre-amp. A/DA has included a great sounding FX Loop with a return level control to match your effect's output as required. Both the input and FX loop are buffered, allowing you to retain your tone along the whole signal path, even with long runs of cable or pedals.  A post-gain/master boost offers up to +16dB for solos or can be used in isolation of the pre-amp for boosting the front end of an existing amp. A dedicated tuner output is also included for convenience.

The APP-1 is a very flexible beast considering its diminutive size - it's smaller than many distortion pedals I've used and can be run from a good pedal board power supply. Each channel has an independent three-band, passive EQ that is based on a 1960's Fender tone stack design. Drive and Master controls are independent for each channel and the three voicings can also be switched per channel, allowing for a clean to high gain setting on both channels as required. The pedal can be run in three modes allowing for standalone pre-amp operation, pre-amp plus footswitchable boost, and boost only mode. The FX loop can also be switched in and out as needed. A bypass switch allows for true bypass or tuner mute functionality. It would've been nice to see the bypass in the form of a footswitch but as you'll normally have a pre-amp on all of the time it's not a deal breaker. Channel switching and boost functions are controlled by footswitches.

Build quality is superb - apparently, the units are all handmade in California - the pedal feels bomb proof and all controls are solid with a positive motion for each dial and switch. Ins and outs are high quality and the included buffers do their job very well with an extremely low noise level.

In use the APP-1 was very impressive, with a wide range of tones that were all exceptionally responsive and musical. A/DA has much experience with pre-amps and this shows with the APP-1. Super clean, sparkling tones reacted just like a classic tube amp and can be brought into lovely crunch territory using the dynamics and drive controls. The OD and Dist voicings allowed for huge variances in drive level and you have to work really hard to draw a bad tone out of this unit. Pick dynamics and guitar volume changes are represented with frightening accuracy and the experience is very refreshing in this day of digital amp and cab modelers. Drive tones are thick and full sounding, ranging from bluesy breakup to high gain metal tones with scooped mids and the boost produces nothing but volume, keeping your tone intact at all times.

If you are looking for a compact, quality sounding and flexible pre-amp then I can't recommend the APP-1 highly enough. It responds better than many tube pre-amps and has a huge range of tones on offer in a very sturdy, small package. The FX Loop and boost add to the professional appeal of this unit and I can see this popping up in more and more rigs as people remember just how good A/DA's products can be.