Whitesnake To Release 'Made In Japan' CD/DVD 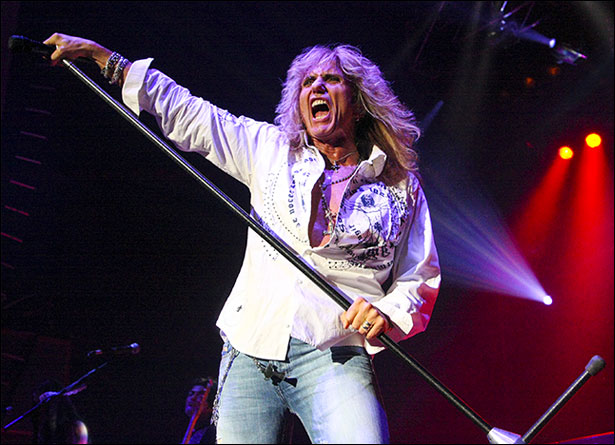 Frontiers Recordsis has announced that Whitesnake'shighly anticipated live concert "Made In Japan" will be released onDeluxe 2CD/DVD Edition, Blu-ray and DVD in the UK on Monday April22 (U.S release is April 23).

Filmed on the Japanese leg of Whitesnake'smomentousForevermore World Tour,in support of their 2011 album ofthe same name, "Made In Japan" is packed full of the incrediblesongs that continue to keep the band at the very forefront ofrock'n'roll. The "Forevermore" songs alone are worth the price ofadmission, and that's before factoring in the hits such asIs ThisLove,Still Of The NightandHere I Go Again. It's all here. This iswhat Whitesnake fans, new and old, have been clamouring for.

The 'Forevermore' songs alone are worth theprice of admission, not forgetting the classic Whitesnakesongs,  "Is ThisLove,"  "Still Of TheNight" and  "Here I GoAgain," all performed at the height of theirmusical powers.  It's all here. This is what Whitesnake fans,new and old, have been clamouring for. Highlights includeblistering guitar work from the band's six string guitarslingers,  DougAldrich and  RebBeach, who both celebrate their 10th anniversarywith the band this year.

Whitesnake also features the earth-shakingrhythm section,  The WreckingCrew featuringMichaelDevin (bass) and  BriianTichy (drums), who anchor the deep anddirty foundation of Whitesnake. The band is accompanied by theswirling sonic tapestries of special guest keyboardist Brian Ruedy, and of course, the chestbeating, seductive vocals of front man and founder, David Coverdale.

After hearing the sound check recordingsfrom the different Japanese venues, the band decided to includethem in the package as special bonus content. They agreed thateverything would be related to their 2011 Japanese tour. So, whenyou think about it, it is appropriate they've called the project"Made In Japan".

"Made In Japan" coincides with Whitesnake's UK Arena tour alongside Journey, withspecial guests Thunder. The tour starts at the Glasgow SECC onSaturday May 18th and runsnationwide.