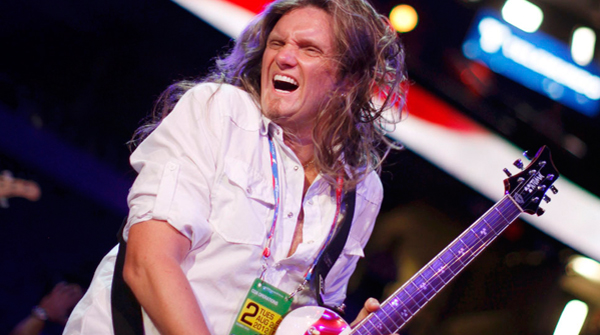 Whitesnake have named the latest addition to the line up, Night Ranger guitarist Joel Hoekstra.

On the new addition frontman Dave Coverdale said (via Hennemusic):

“One of the first, if not the first, guitarists to put his name forward after hearing that Doug Aldrich had left the band, was an exceptionally talented musician whom we had met briefly last year when his band opened for Whitesnake in Arizona. Everyone was very impressed by him, not only for his ability to play amazing guitar, but, also, his very agreeable personality & he was definitely foremost in our minds when we began to search for Doug’s replacement in Whitesnake.”

“We jammed together & were mutually impressed enough to ask him to join Whitesnake on the spot. This was May 30th. 2014,” he continued. “Joel is currently fulfilling his remaining tour dates with Night Ranger.”

In May Aldrich announced his departure from Whitesnake after nearly 10 years with the outfit citing other projects as the reason for his departure.  One of which could be Aldrich's involvement in a new three piece featuring himself along with Journey drummer Deen Castronove and Jack Blades, frontman and bassist for Night Ranger.