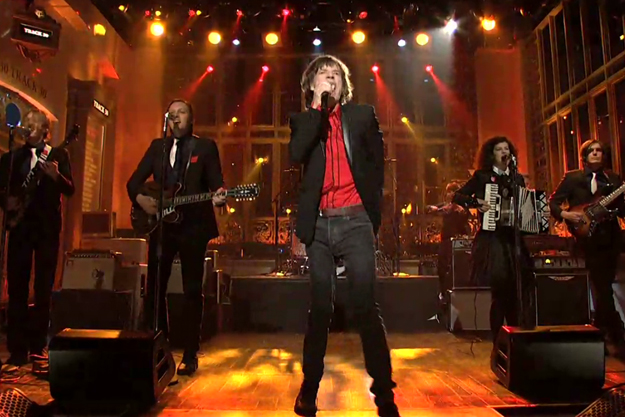 Rolling Stones lead singer Mick Jagger vamped, preened and swaggered through his appearance on the season finale of "Saturday Night Live." The rock legend not only hosted the show, but also put on four memorable musical performances, backed up by an impressive backing band made up of friends that included Arcade Fire, Foo Fighters and Jeff Beck.

The highlights were his literal blues song 'Tea Party', performed alongside old friend Jeff Beck "I love the blues because in any era, the blues talk about what's on people's mind," he said at the song's outset. Whilst far from Mick's best lyrical work in what seemed like a hastily put together observation on the current US election campaign, but executed so as not to offend anyone. We just can't find fault in anything Jeff Beck does. Every blues lick is a joy to watch and it's just a shame we didn't get to see Beck let rip on the short (for a blues song) jam.