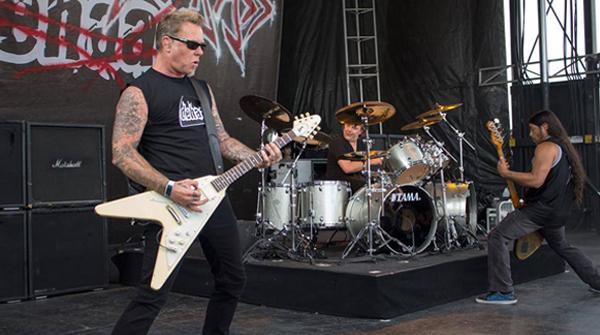 The video, which is just over 50 minutes long, features the BayArea thrash legends performing their 1983 classic album'Kill 'Em All' in full

This year's festival was held in Detroit at Belle Isle andincluded five stages of metal, punk and dubstep with more than 30bands performing. On the first night of the two day eventRed Hot Chili Peppers headlined whistMetallica wrapped up the weekend fiesta on theSunday evening.

In the video, which can be viewed in full below, JamesHetfield appears on stage to introduce a 'mystery band' bythe name of Dehaan. As a rumbles of cheers and whistles begin tobuild it's clear that the majority of the crowd are well aware ofwhat is about happen. The guitarist is then joined by the remainingmembers Lars Ulrich, Kirk Hammettand Robert Trujillo before ripping in to 'HitThe Lights.'