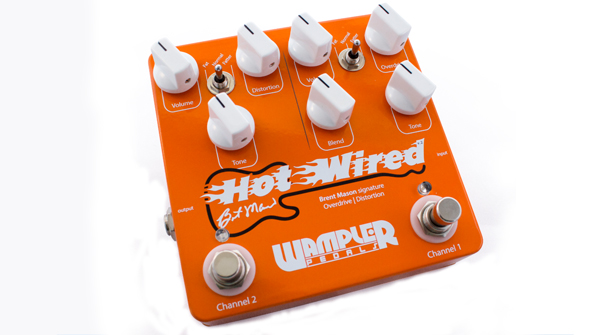 Most people think they've never heard of  BrentMason. We would bet that although you may not recognizethe name, chances are huge that you have heard him. Brent is,without doubt, the number 1 session musician working out ofNashville and has been since the early 1990's.

If you have seen 'Friends', 'Bridget Jones Diary' or'Becker'… Or listened to Shania Twain, Travis Tritt, Alan Jackson,George Strait or any other of the hundreds of artists that callBrent first when they need a guitar player on their recording,you've heard him. It's getting to the point now where Brent isprobably one of the most recorded guitar players inhistory.

Not only is he a now a legendary studio figure, but also arenowned composer and songwriter. His compositions have been usedin countless films, TV shows and commercials. His solo albums, inparticular "Hot Wired" (from which this pedal got its name) hasbecome almost mythical in its reputation for guitar tone andquality of musicianship. With Brent, you will not believe it untilyou hear it.

Built on the foundations of v1, v2 stands alone in terms ofversatility. The studio scene in Nashville has changed over thelast few years, so Wampler had to change the Hot Wired to mirrorthe industry Brent works in. As you may already know, v1 was gearedtowards all out chickin' pickin' and beyond - v2 brings you abroader range of subtlety in channel 1 that mirrors Brent's worktoday. You can still find the chickin' pickin' tones, but you canalso find a deeper, warmer overdrive section that will allow you toplay as smooth as you like. With the added blend control, you won'tbelieve how fat your tone can be without it sounding toooverdriven. Channel 2 still has the same "Plexi" flavor that Brentloves.

Two pedals in one (overdrive and distortion), this iswithout doubt one of the most versatile pedals available today. Onechannel has all your overdrive needs, from a gentle break up to allout crunch, the other gives you dirt... Loads of fat, creamydistortion that is tonally perfect from top to bottom. If need beyou can stack them both together for a huge, hugesound.

Brent uses this pedal daily in the studio. He uses it live.When it has Brent's name on it, you know it's nothing short ofperfect.