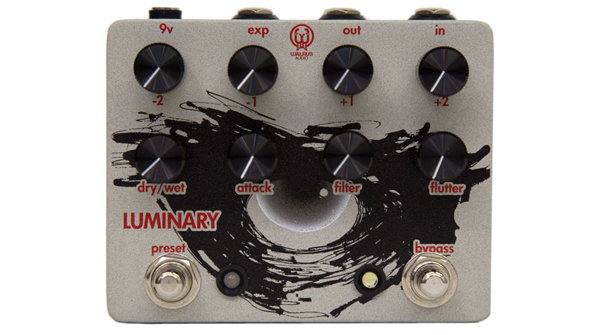 In a dystopian future, a tyrant dubbed, The Luminary, rules in what used to be a free world. The spread of his reign is exponential, like octaves of power ruling submissive and rebellious districts. He preaches a polyphonic message that’s crystal clear. It is beautiful. But be not mistaken… it is dangerous.

Walrus cannot be more thrilled to release the Luminary Quad Octave Generator; the Luminary is a powerful polyphonic quad octave generator with features for creating inspiring symphonic gusts of sound. Operating on the Analog Devices Sharc platform, the Luminary gives you the ability to dial in any combination of four separate octaves including -2, -1, +1, and +2, the user can craft many different complex sounds and textures with crystal clear and immediate octave tracking. The Luminary has three onboard presets available for saving your go-to sounds, as a well as live mode. This means the user can have up to four custom sounds available at any moment. Get epic steel sounds with the modulation control unengaged. You’ll find more experimental options with the filter control or a swirling chorus with the flutter control. Couple the Luminary with an expression pedal to expand its creativity even more.

Four octave options available -2, -1, +1, +2 – The four knobs across the top of the pedal control the level of each octave. With the Dry/Wet control, the user can explore the ground between minimum and 12 o’clock to keep the octave signal lower than your dry signal for subtleness. The territory between 12 o’clock and maximum keeps the user’s dry signal lower than unity for a boastful octave sound.

The Attack control dictates how fast the octaves bloom after the initial attack. Allow the octaves to swell in gradually at a higher attack setting. Hear immediate octave response with the attack control low or off. The Filter knob controls the cutoff of a low-pass filter on the octave signals and also increases an envelope type effect at higher settings. The Flutter knob enables a chorus effect that can be applied to the octaves. At zero, the chorus effect is off. Increasing this knob engages the chorus modulation and controls the rate of the effect. At lower settings, the user hears a lightly modulated seasick effect, and when set higher, the user can achieve some alluring ring modulation type sounds.

The expression control allows the manipulation of any combination of these options to allow the user to customize the effectiveness of the Luminary: -1 and +1 octave volume, +1 octave volume, Attack, Flutter, and Dry/Wet

Walrus Audio is offering The Luminary for a retail price of $319 and is available for pre-order now at www.walrusaudio.com and will soon be available with our authorized dealers.