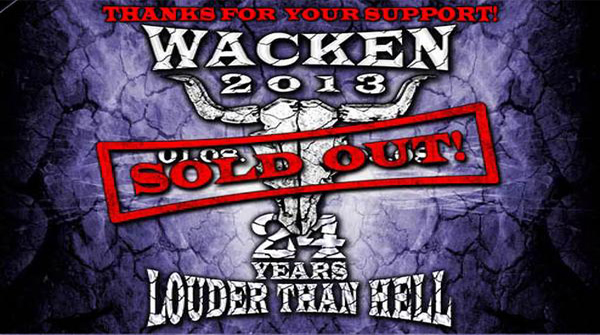 One of the leading festivals in the Metal world, WackenOpen Air has reportedly already sold out of tickets for nextyear's event, reports MetalTalk.

Ticket sales for the event, which will takes place in the firstweek of August in 2013, have been undoubtedly boosted by theannouncement of Berlin's, Rammstein. Alsoannounced for Wacken 2013 areDeep Purple, Sabaton,Nightwish, Rage,Doro, Candlemass,Anthrax and Arc h Enemy.

In order to prevent touts and fans from cashing in on sites suchas Ebay, the promoters of Wacken have arranged a ticket exchangefor those looking to go. For more information click on the link here.

This will be only the seventh time Wacken Open Air has sold outsince its inception in 1990, however this will mark the first timethat all 75,000 have sold out in such a short space of time, some11 months beforen the event starts.