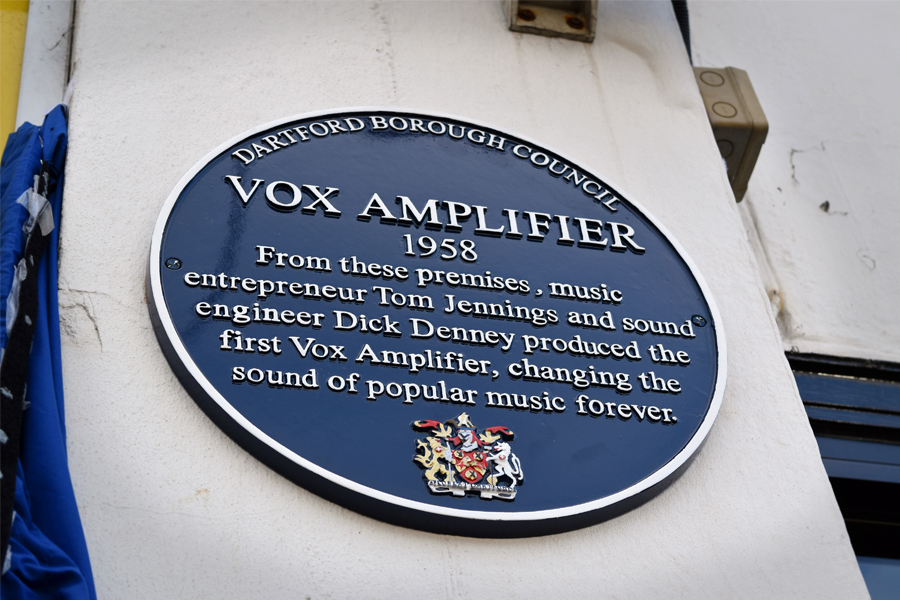 A special blue plaque has been unveiled at the site of the premises where the first VOX amplifiers were produced, marking the achievements of music entrepreneur Tom Jennings and sound engineer Dick Denny.

The unveiling took place during a ceremony in Dartford Kent on the 14th February, attended by council dignitaries, representatives from today's VOX management and most notably, many members of the original staff of VOX in the 1960’s who were part of the team responsible for changing the sound of popular music forever.

In the mid-1960’s, young groups including the Beatles, the Rolling Stones, the Yardbirds, the Dave Clark Five and so many more led the “British Invasion,” when rock and pop acts became incredibly popular in the USA. VOX was at the forefront of this invasion as it was these bands first and only choice of amplifier.

The plaque was campaigned for by VOX enthusiast Stuart Leech who commented:

“The reason I campaigned for this plaque is to mark the heritage of Dartford and the past employees of VOX, and also fitting it was unveiled at its 60th anniversary, they have made such an impact on the music industry. People can walk past this plaque with pride, knowing not only Dartford was the “true” home of VOX but also it was members of their own community that were behind the huge success of VOX amplifiers.”

“What is clear from talking to the original staff is that VOX was right there at the start of British Rock ‘n’ Roll. Korg has owned the VOX Company now for 25 years and everyone here is very proud to see the original team recognized in this way. There are many similarities between Korg in Japan and VOX in the UK as both have always sharedthe values of being passionate about supporting musicians and helping them find new ways to make music by innovating and constantly trying new things. VOX has a brilliant development team here in Milton Keynes combining British design with Japanese technology and investment. Through Korg distribution partners we have been able to build on those origins in Dartford to make VOX one of the world’s biggest music brands.”

The massive success achieved by VOX in the 1960’s laid the foundation for the legacy that continues to thrive today in VOX’s 60th anniversary year.