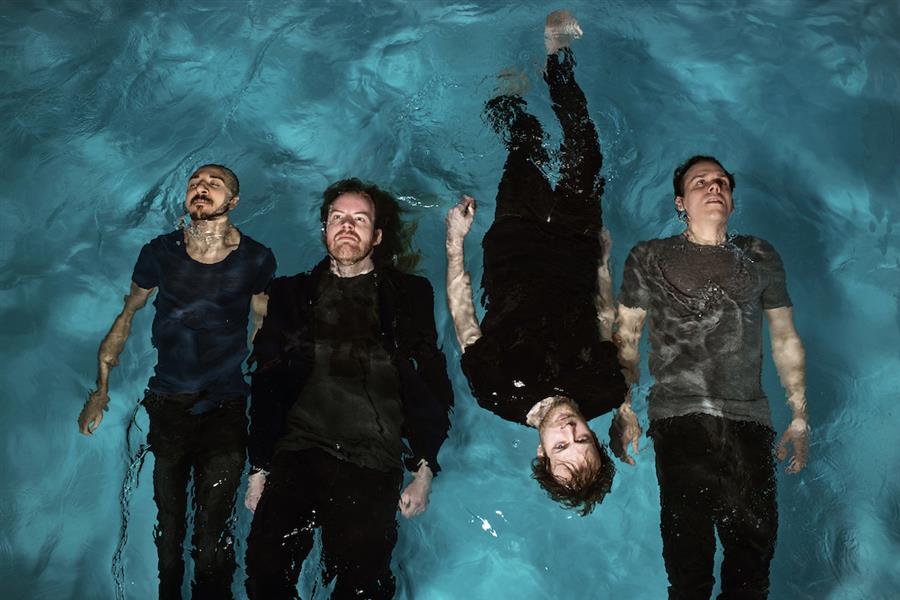 Tour With Monuments Starts Next Week

Catch VOLA On Tour With Monuments

Watch the videos for

Copenhagen’s progressive, genre-crossing quartet VOLA will be heading to the UK next week to support UK Tech-Metal band Monuments. The bands new album Applause Of A Distant Crowd is out now via Mascot Records/Mascot Label Group.

On the new album, Asger Mygind (vocals/guitar), Martin Werner (keys), Nicolai Mogensen (bass) and Adam Janzi (drums) probe society’s distractions from thoughtfulness and examine the way human relationships have evolved whilst touching upon fear and anxiety. Where their debut Inmazes dealt with the struggle that came with being trapped in mental mazes, the themes are now focused on the outside world rather than internal conflict.

Talking about his headspace when writing the new album, Mygind explains, “I was in a very different place mentally while writing the lyrics for ‘Inmazes’. I'm definitely in a happier place now. It was actually a relief to be able to have a wider range of awareness for this record. I think our songs develop in the most natural way if I let my emotional response to the music dictate what the lyrics should be about rather than following any kind of plan. This time the emotions were mostly tied to observations I've made about the outside world.”

The album title is a metaphor derived from our relationship with social media, how we can appear close but be miles apart. Mygind elaborates: "We spend a lot of time trying to present ourselves in a flattering light in the pursuit of continuous applause, even if it’s a distant applause from those you may not connect with away from the screens."

On this record, they embraced a different approach, the guitars have less gain, the drums sound dirtier and more alive, and everything feels looser. The contrast between the mellow and heavy is more profound than on any of their previous releases.

Once again produced by Asger, the album was recorded in Copenhagen at Heyman Studios and then Asger’s own home studio whilst the mastering was done by Andy VanDette (Porcupine Tree, Steven Wilson, Devin Townsend, David Bowie).

There are several topics explored throughout. It delves into the growth of social media and its implications on what we consider the norms of human relations on ‘Ruby Pool’ and expanded even further on the title track ‘Applause Of A Distant Crowd’. A heart-wrenching story through the eyes of someone seeking solace and support in social media after a breakup, “watch me now, I’m vanishing in the light, I’m filtering my losing streak, warm and bright,” Asger yearns over a soft hum before it escalates into spiraling musical fireworks ramping up the descent into emotional solitude.

Relationships are further explored on ‘We Are Thin Air’ which deals with a fragile facade between two partners, the psychological implications of a breakup on ‘Vertigo’ and the fear of how you will be remembered on ‘Whaler’.

‘Ghosts’ is about the fear of death and the strategies we use in an attempt to undermine it. Fear in its various forms weaves its way through the album and makes an appearance in the form of terrorism on ‘Still’ and ‘Alien Shivers’. The latter is about a friendship that is shattered because of a planned and executed terrorist attack and is viewed from perspective of a survivor, while ‘Smartfriend’ is a story about trying to be on the forefront of society by surgically altering your body.

“I make up characters and write the lyrics from their perspective,” he explains. “How much I put myself into these characters varies from song to song. This approach gives me the excitement of being able to say things that I wouldn't be able to say was it from my own point of view.”

As a society our attention spans have shrunk as we feel the need to quickly update ourselves on what is happening in the world around us at any given moment, “It's so easy to flee from self-reflection these days, and I do it myself all the time,” explains Asger.

We distract ourselves from living in the actual moment and becoming a slave to the constant and relentless flow of news, entertainment and the rabbit holes it takes you down. “I'm afraid that sometimes it keeps me from being as thoughtful as I could be - and as a result - as creative as I could be,” he says.

Upon its release ‘Inmazes’ was met with a wave of critical praise; Prog magazine lauded their “widescreen heavy stadium Prog”, Metal Hammer rejoiced in the “genre-defying, weighty riffs, gloomy, ambient soundscapes and guttural grooves” whilst The Sun exclaimed their “genre-mashing” ability. The single ‘Stray The Skies’ was playlisted at both Kerrang Radio and Scuzz TV and they ended 2017 with a nomination for the Limelight Award at the Progressive Music Awards.

A lot has happened over the two years since their debut was released. Having only played a handful of shows before ‘Inmazes’ was released they have since taken part in the ‘Fallen Hearts of Europe’ tour with Katatonia from September to November 2016. Drummer Felix Ewert has left to pursue other projects and was replaced by Adam Janzi in summer 2017. He joined them for a series of festival appearances at ArcTanGent (UK), Rockaue Open Air (DL), Take Over Daze (DL) as well as their first ever run of UK headline shows the same summer including Dingwalls, London. More shows followed in 2018 with Euroblast (Germany), Complexity Fest (Netherlands), Tech-Fest (UK), Bloodstock (UK) and they will be touring Europe fall 2018.They have even picked up fans in the shape of Alter Bridge’s Myles Kennedy as well as Trivium’s Matt Heafy and Paulo Gregoletto along the way.

As with its predecessor, ‘Applause Of A Distant Crowd’ is an ambitious and thought provoking dissection of fragile human emotions through an exploration of musical textures. VOLA are ever evolving, always delving and dissecting the recesses of human thought and creating rich and textured soundscapes. 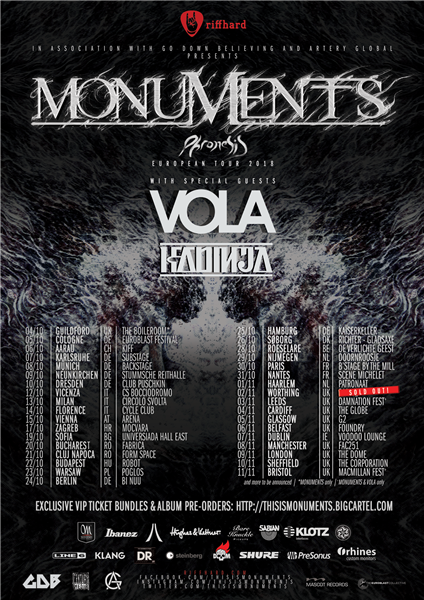