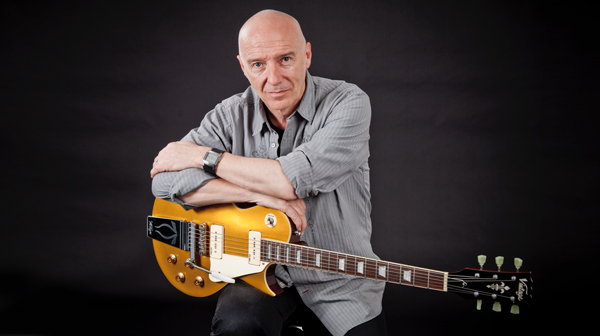 First coming to prominence in the 1970s with bands like Slik, The Rich Kids, Visage and even replacing Gary Moore as temporary member of rock band Thin Lizzy, Midge became an household name in 1980 when he replaced John Foxx as frontman of the New-Wave outfit Ultravox with whom he had a string of hit album and singles including the now-classic 'Vienna'. Although the group disbanded in 1987, they reformed in 2009 for a 30th anniversary tour which was so successful they went on to record their 6th studio album together 'Brilliant' in 2012.

Having already played the Vintage V100MRPGM and V100GT models for a number of years (and Vintage VE2000GG acoustic model) the V100MU was designed in conjunction with Midge himself and legendary guitar 'guru' and designer Trev Wilkinson.

Featuring a solid mahogany body with a carved top, mahogany neck with rosewood fingerboard which features Vintage's signature drop shoulder and offset heel providing an ingenious way of improving access to the upper fretboard and opening up your playing.

Twin Wilkinson WP90SK stacked pickups give a slightly hotter output, which can be gradually backed off to a traditional single coil tone via the 'Roll-control', whilst the Trev Wilkinson designed GBR roller bridge with its vintage style vibrato and tailpiece provides rock solid tuning and return-to-zero performance every time thanks to the additional E-Z-Lok machine heads.

A driving force behind Band Aid, Live Aid and Live Aid 8 alongside Bob Geldof,  Midge also co-wrote and produced 'Do They Know it's Christmas?" which has gone on to become the second highest selling single in UK chart history. Midge is still actively engaged in charity fundraising and is an ambassador for Save The Children.

His solo career began in the 1980's with the release of his debut album 'The Gift' which included the number one hit single 'If I Was' and has since released a further five solo albums. He continues to tour playing a selection of his classic solo and Ultravox hits both with a live band and acoustically.

Midge is also a talented cook,  narrowly missing out on winning TVs 'Celebrity Masterchef' in 2007 after winning his heats and taking part in the final.

The Vintage V100MU will have a UK RRP of just £499 and will get its official UK launch at the annual JHS Event (Sunday 8th - Wednesday 11th June), and JHS trade visitors will be able to meet Midge in person on Monday 9th.

"I've always been really happy with all my Vintage® guitars, but the V100MU is everything I've ever wanted in a guitar" says Midge "it is a thing of beauty not just to look at but to play."

"Most of my days are great and some are just incredible." says designer Trev Wilkinson. "Having Midge Ure drop by my workshops to work on the finer detail of his signature model was a real highlight. To have someone of Midge's stature taking the time and trouble to do that isn’t something you experience every day. Thanks Midge!" Trev.

Find out more at: JHS