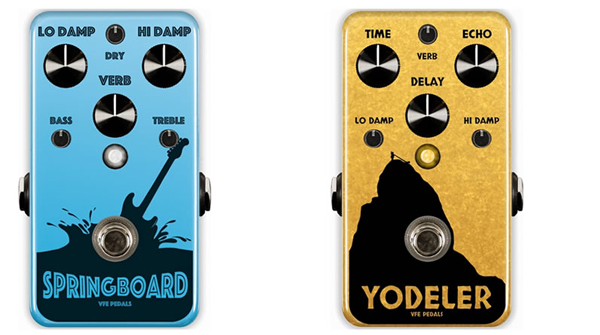 (PRESS RELEASE): VFE Pedals is launching two new ambient effect pedals on Indiegogo – the Springboard echo-verb and the Yodeler delay-verb. Save $10 to $40 by pre-ordering at igg.me/at/vfe.

The Springboard yields lush and springy verb soundscapes from the BTDR-3H brick. This reverb is not created via DSP algorithms, but rather a patented network of delays with interwoven feedback paths that creates its own reverb category. Two feedback controls have been added to tailor both the length and tonal structure of the reverb trail. With the active EQ section, the Springboard can go from bright to brooding.

The Yodeler somehow crams a delay and reverb into one compact box, with independent mix level controls for each. Not only that, but an internal switch lets you choose if the reverb is in series (reverberates each delay repeat) or parallel and independent from the delay. This lets you use the Yodeler as a standard delay or reverb, as a reverberating delay, or as a reverb with infinite trails & control over the pre-delay.

All VFE Pedals are built by hand in Puyallup, WA, USA.