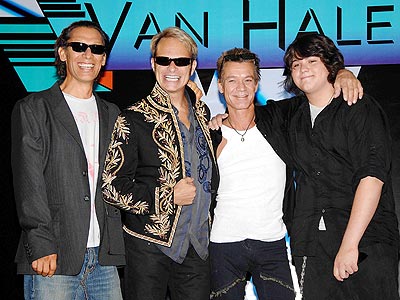 A full length concert from the recent Van halen 'A Different Kind Of Truth' has emerged online. The multi-camera fan filmed video shows the band midway through their ill-fated tour of which the majority of dates have been postponed. The band initially offered no explanation as to why the tour was to be put on hold.

A few days after the announcement, singer David Lee Roth explained the situation, saying "As usual, we bit off way more than we can chew when it came to scheduling. The band is winning, but our schedule has been sidelined for unnecessary roughness. If we continue past July 4th and all the way into Australia and Japan, then we're asking for the robot zombie tour."

"We're gonna take a break because this tour is gonna take us about two years," added Roth.

"The band is getting along famously, better than we have in quite some time, and I think the shows reveal that through the miracle of YouTube," Roth said. "I think we're one of the few bands who relishes you bringing whatever camera - if you can carry it in and pull the trigger on it yourself, then please do. And through the eye of YouTube, you can see that we're having ourselves a hell of a time, and I think that translates into the music."

Plenty of fans are taking the band up on the chance to film the 2012 shows, including the group's late March stop in Pittsburgh at the Consol Energy Center.

The setlist from the Pittsburg show is as follows. Watch it the video below.