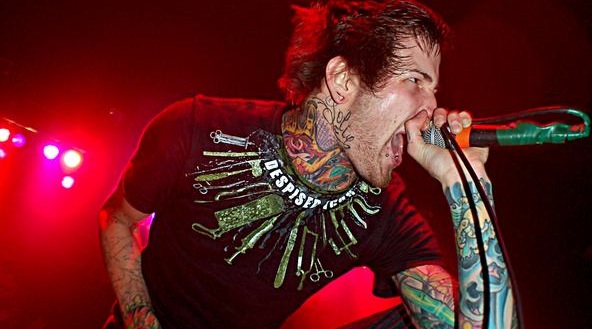 Following the tragic death of 28 year old Suicide Silence frontman Mitch Lucker, charity organisation Unite the United will be holding an auction in memory of the late metal vocalist with all the proceeds going to benefit Kenadee Lucker, the singer's young daughter.

Unite the United was started by Warped and Mayhem Tour founders Kevin Lyman and John Reese, who said in a statement:

"We are all in shock about the sudden and tragic death of Mitch Lucker of Suicide Silence. Although the world and our lives will move on, he leaves behind a beautiful daughter, Kenadee, who will need the support that he promised her, and sadly will not be able to fulfil.

"With that said, we feel his music family from the Vans Warped Tour and Rockstar Mayhem Festival can step up to help in the best way we can and that is to dedicate our winter charity auction proceeds to a trust fund for her future education and care. Please show your support by checking our auction frequently for new items and bidding generously. Thank you."

The Unite the United Mitch Lucker Memorial Fund auction will run from today (Friday 23 Nov) at 9AM PT through Monday, Dec. 3, at 3PM PT.

Some of the items on the auction block include:

* an autographed Mitch Lucker poster with the photo taken during the 2011 Rockstar Mayhem Festival.

* Plus many autographed items from Slipknot, Slayer, Godsmack, Megadeth, Motorhead, Unearth, Machine Head, Trivium, As I Lay Dying, The Devil Wears Prada, Bring Me the Horizon and more.

Fans can also donate directly to the Mitch Lucker Memorial Fund at the Suicide Silence website.