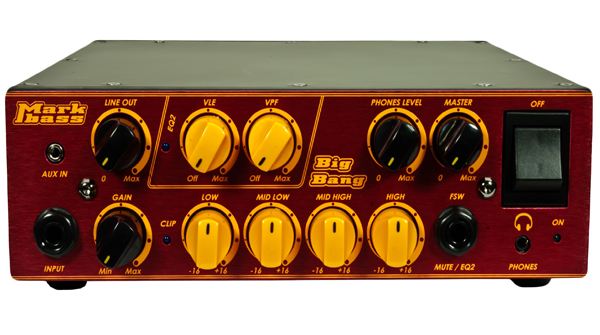 Weighing in at just 2.15kg and featuring a solid state preampand digital power amp, Big Bang delivers 500W of power (at 4ohm)and an impressively huge, warm tone that sets a new standard forwhat can be expected from a digital amp. Several new features havebeen added as a result of customer requests, including Aux Inputfor connecting an iPod or MP3 player to mix with your bass soundand a headphone output with separate level control. When headphonesare connected other outputs are automatically turned off, so youcan practise almost anywhere without disturbing anyone else.Footswitch control of muting and EQ filters has also been added,allowing instant access to two different EQ settings - great forlive situations. Other features carried over from Little Markinclude a 4-band EQ, effects loop, level control and pre/post EQswitch for the XLR DI output.