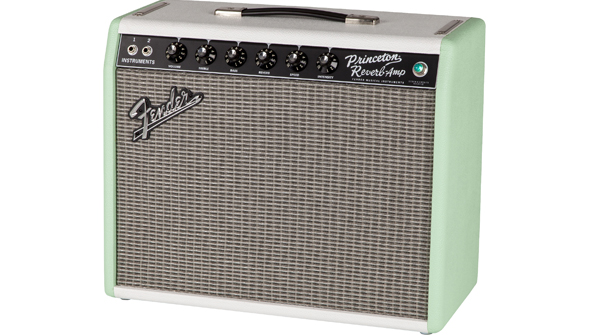 Fender have released'Special Run' versions of two of their most famous tube combos, the'65 Princeton® Reverb, in a range of cool colours and with avariety of speaker upgrades, and a Deluxe Reverb® with mahoganycabinet and cane grill cloth. Very limited numbers will beavailable in the UK.

This Limited Edition Two-Tone FSR in Surf Green and Hot Whiteharkens back to a 60s vibe while the warm midrange breakup of aCelestion® Greenback G10 speaker adds a slightly more aggresivefeel. It's the perfect amp for small gigs that need a little extragrowl and punch. The original was a historically significant ampused on countless hits over the years, and the reissue '65Princeton® Reverb is easily versatile enough to go from the livingroom to the recording studio to the small gig. It has the vintagevibe that Fender® die-hards know and love, but the '65 PrincetonReverb isn't only for those who played them 30 or 40 years ago -it's for anybody who demands top-notch tube tone, naturally dynamicclean and overdriven tones, and unmistakable long-spring Fenderreverb and tube vibrato.

The Deluxe Reverb® 'Mahogany Cane' is an amp as toneful as it isbeautiful! This African Mahogany with Cane grille cloth stunner is22 watts of aural bliss. The perfect amp for rock, country or bluesplayers who want a moderately powered amp they can crank up at thegig or in the studio. The full, snappy guitar tones heard on manyfamous recordings from Memphis to Abbey Road were made using theDeluxe™ amp. The shimmering highs of the Celestion® Blue speakerbring out subtle nuances when playing clean and midrange punch whencranked for super touch sensitivity.