Two Classic Designs in One; the ES-Les Paul 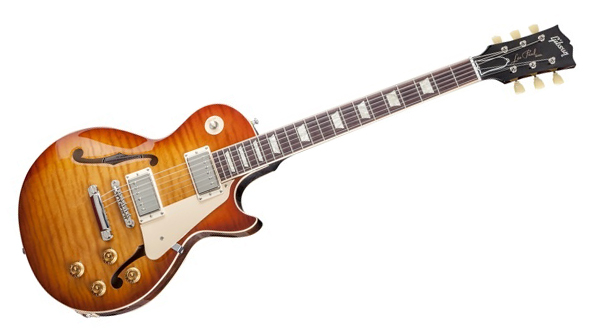 Gibson brings together two iconic models to create the ES-Les Paul, the Gibson Les Paul combined with a Gibson ES-335 in what's being called a stunning "meeting of minds".

(PRESS RELEASE): The solidbody Les Paul Standard and semi-acoustic ES-335 are the two most influential electric guitars ever to hit their respective genres. Now Gibson brings them together in the ES-Les Paul, a stunning "meeting of minds" that blends the most important aspects of form and function from two immensely popular designs. Far more than merely a “chambered Les Paul” or an ES-335 "shaped like a single-cut", this entirely new guitar is the result of painstaking assessment of what makes each of these legendary models great, and a careful marriage of features by the skilled luthiers at Gibson Memphis.

With its laminated maple top, back and sides in the semi-acoustic construction of the ES-335, and a solid mahogany center block for enhanced sustain and feedback reduction, the ES-Les Paul elegantly marries the major characteristics of these two great Gibson guitars. Take away the telltale f-holes and the look is pure Les Paul, as is the glued-in mahogany neck with rosewood fingerboard and classic trapezoid inlays and LP-style headstock. Common to both—and carried through on the ES-Les Paul—are the traditional control section, toneful hardware, and dual humbucking pickups, a pair of MHS (Memphis Historic Spec) Humbuckers wound to accurately replicate the sonic glories of vintage PAFs. Get it in a your choice of Black top w/ historic walnut stained back and sides finish, or Light Burst finish with figured maple top and historic walnut stained Back and sides.