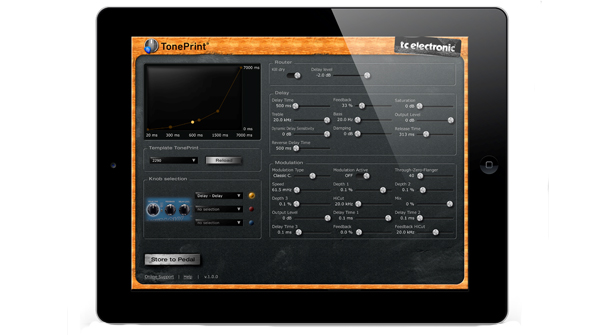 In order to connect TonePrint pedals to the iPad, guitarists can use the standard aftermarket camera kit, which allows for connection of a USB cable.

The TonePrint Editor allows guitarists to build their own custom version of a TC Electronic effect from the ground up - from sounds to the range of knobs and everything in between. An intuitive slider-based UI, real-time changes and easy storing of sounds allows guitarists and bassists alike to easily and quickly craft the sounds they want to hear and pair them with the best TC Electronic effects out there.

But what really sets the TonePrint editor apart is the depth with which guitarists and bassists can craft tones. Far from ‘be-all-end-all’ pedals where the only real difference is which preset you load into the pedal, the TonePrint Editor starts at zero, and from there anything is possible, from the function and range of knobs to effect parameter behavior and everything in between.

”I personally think anything that interacts with an iPad is fun. But the intuitive, slider-based interface of the TonePrint Editor is such a perfect fit for iPad that it brings customizing TonePrints to a whole new level. I know it’s not a stretch to bring your laptop to rehearsals or a gig, but with the iPad, things are even more streamlined – throw it in your bag and customize sounds to fit the venue you’re playing, or whatever mood you might be in. Quickly, on-the-fly and with amazing results."