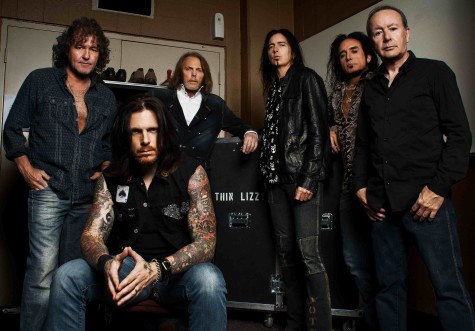 Thin Lizzy guitarist Damon Johnson has announced the band'splans to enter the studio and begin work on an album of newmaterial. Since reforming after the death of original frontman andsongwriter Phil Lynott in 1986, the irish rockers have been amainstay on the european touring circuit and despite releasing ahandful of live albums have not released any new material sincetheir intial breakup follwing 1983's 'Thunder and Lightning'.

In a recent interview with Rock Fusion, Thin Lizzy frontmanRicky Warwick talked about the band's plans for a new record,"We've just been working on some ideas that we all have. We allwrite in the band, so we've just been sitting down and playing eachother our stuff, and it's been really great. I mean, it's reallyearly days, but everyone's very excited and got loads of ideas, andwe're all working really great together as a band, and that's whatit's all about - let's get in there and see what ideas we have andtake it from there. It was all very productive and we all had agreat time. We're back in next week so we will just take it fromthere and see what happens. Ideally we'd love to record as much aswe can, but obviously it's got to be to a great fucking standard.We're all as nervous about it as the fans, but in a good way. Thebar has been set very high and we will only release what we 100percent believe in, whether that's two tracks or 12 tracks. I mean,I'd love it to be a full album, but we'll just need to take it asit goes."

Asked about plans for a live DVD in the future, Warwickresponded, "Yeah, there's talk about that further down the line. Imean, VH1 are revisiting us, they're updating 'Behind The Music' toinclude the new members in the band. Last year was all aboutre-establishing the band, the brand and the name and showing thatwhat we have is something very real, and I think we've got overthat hump now and this year we can move on. It's a case of takingit one step at a time. THIN LIZZY fans are very passionate and soloyal, you can't just go, 'Look, the band's back together, here'san album, here's a tour, and you'rd going fucking like it.' You'vegot to do it one bit at a time and win people over, and that's whatwe're doing. Like I said, at the end of the day, we are all fans,too."