The Who: Live In Hyde Park Released on DVD, Blu-ray, CD and LP 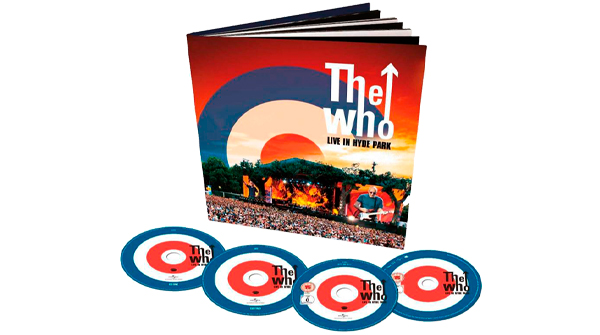 (PRESS RELEASE): Filmed on June 26th this year as The Who celebrated their fiftieth anniversary, this stunning show from London’s famous Hyde Park is a triumphant return to their home city.

On a glorious summer evening the band delivered a brilliant performance of all their greatest hits in front of a 50,000 strong crowd. With a series of stunning backdrops making full use of the huge screens surrounding the stage and an exceptional light show this is a Who concert on a grand scale but as Pete Townshend says at the start of the show “You’re a long way away…but we will reach you!”. He’s absolutely true to his word.

Fitting culmination to The Who’s fiftieth anniversary celebrations. Includes My Generation, Pinball Wizard, Baba O’Riley, Pictures Of Lily, I Can’t Explain, You Better You Bet, Who Are You, Won’t Get Fooled Again, Join Together, The Kids Are Alright, I Can See For Miles and many more! Out on 20 November 2015.