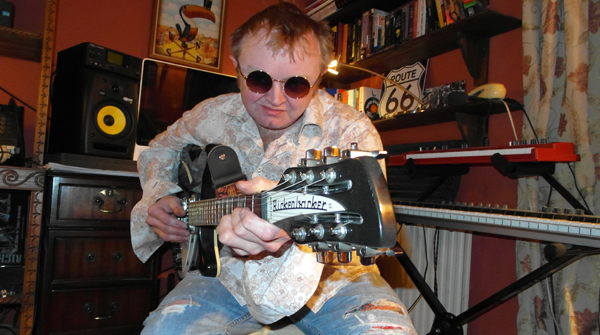 The Tall English Sun, is a stunning neo-psychedelic influenced debut album from Jason How, the CEO and Managing Director of the world famous Rotosound Strings.

Drawing heavily on the musical influences he has been surrounded by all his life, Jason’s strident tunes and lyrical flights of fantasy have been buffed to attain a distinctly twenty first century sheen. This collection of tracks is neo-psychedelic pop at its best, positively throbbing with a lysergic glow, blending the jarring chords of Arthur Lee’s Love with uplifting Monkees-style choruses, underpinned by the Stone Roses stoned stomp that echoes through Viaducts of Your Dreams.

The album features ten modern power pop songs garnished with a knowing eye on classic psych, driven by Jason’s knack for stirring in an unexpected harmonic twist or sudden and gravity defying hook. Tracks such as the urgent rocker Into Your Arms recall the signature sound of 2011 Mercury Prize nominated Mancunian indie popsters Everything Everything, proving that Jason’s contemporary psych influences extend beyond the long lost golden Summer of Love.

When commenting on the album artists such as Paul Gray (The Damned) said ‘A genuine popadeic delight from start to finish, chock full of lovely melodies, sprangly geetars and catchy upbeat tunes’, Steve Hunter (Lou Reed) thought it was ‘magnificently beautiful!’ and Dave Paton (Pilot) stated ‘No fillers on this CD!’

Jason How has played the guitars, bass, vocals and keyboards as well as helping to produce the album which was co-produced and mixed with leading sound engineer Keith More (Paul McCartney, Natalie Imbruglia, Lenny Kravitz, Tina Turner etc). Rotosound strings were used exclusively throughout the album as were both the new Rotosound Wobbler tremolo pedal and the King Henry phaser pedal.

Whether you’re into Kaftans and beads or Converse and 10 Deep, one of the great things about contemporary psych pop is that there are no rules. We dare you to ride this musical roller coaster that poises the listener tantalizingly on the brink before plunging down a foaming torrent of crunchy guitars and soaring squadrons of vocal harmonies.

Hop aboard and enjoy this headlong rush into contemporary psych pop…you’ll definitely enjoy this trip!

The album is available now on iTunes and hard copies of the CD can be purchased direct from Jason who can be contacted via his website at www.jasonhow.com