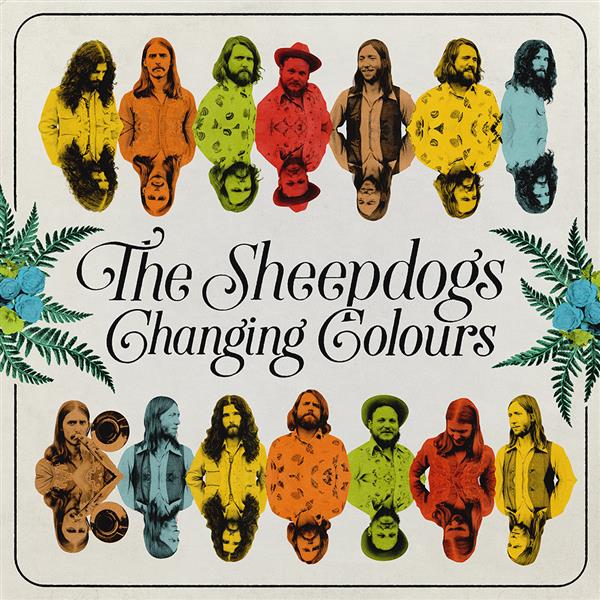 "If you have any affection for the likes of The Band or The Allman Brothers, there's something to dig here" - **** Independent
“Further acclaim surely awaits, and these dogs deserve their day" 8/10 - Classic Rock
"Think Badfinger picking up The Flying Burrito Brothers' bar tab" - Uncut
"Reconstructing old sounds into pleasures not already worn away by repetition is tough, but in Changing Colours The Sheepdogs have carved out a little niche that's all their own" **** - Planet Rock
"Colours change. The brilliance doesn't" 10/10 - Powerplay
"A suave slice of classic seventies rock with plenty of Allman Brothers in the soloing and a middle section that sounds like Wings at their very best" - Team Rock

Quadruple Juno Award-winning Canadian quintet The Sheepdogs have today announced a string of UK/EU shows throughout June and July, including a headline set at Borderline, London on June 29, 2018 (full dates below). News of the dates arrive following the band’s recent sell-out UK tour and in support of their new album ‘Changing Colours’ which is out now via Dine Alone Records (The Dandy Warhols, City & Colour). You can watch the video for recent single ‘Nobody’ at this link.

Proud purveyors of guitar-driven modern-day retro rock, The Sheepdogs have expanded their instrumentation on ‘Changing Colours’ to encompass more styles and hues, enhancing their beef-and-boogie riffs and rhythmic shuffles. Of ‘Changing Colours’, the band notes; “This album has a much wider range of sounds on it: trombone, clarinet, latin percussion, pedal steel, fiddle and banjo all make an appearance. The title ‘Changing Colours’ really lends itself to these different sounds on the record.”

The Sheepdogs have crafted a bustling back-catalogue of albums during the course of their career - including a Patrick Carney (Black Keys) produced album - notching up three no.1 singles and earning four Juno awards along the way. Following in thefootsteps of Canadian rock legends including Neil Young, The Band and The Guess Who with a bold take on classic guitar rock and polished retro sound, The Sheepdogs came to prominence as the first and only unsigned band to appear on the cover of Rolling Stone, subsequently leading to a performance on Jimmy Fallon, a support tour with fans of the band, Kings of Leon, and festival dates including the likes of Coachella, Lollapalooza and Bonnaroo. Furthermore, the band have previously shared the stage with Paul Rodgers, lead vocalist of Bad Company and Free, won the approval of David Crosby and Steven Stills and performed at Petty Fest alongside the likes of The Strokes, The Black Keys and The Hold Steady.