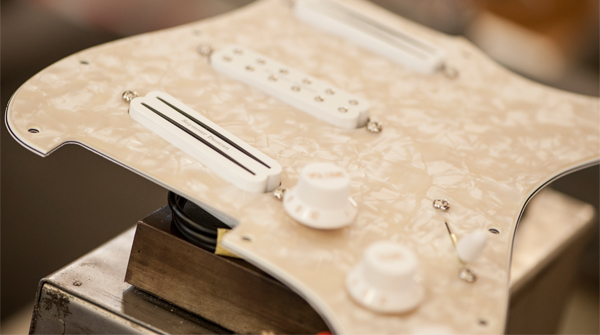 (PRESS RELEASE): Iron Maiden legend Dave Murray demands plenty of versatility from his Fender Stratocaster guitars. He is called on to play everything from clear clean sections to powerful riffs and screaming solos during the course of an Iron Maiden set. For years Murrary has turned to the Hot Rails and JB Jr. to achieve these tones in a classic single coil-sized Stratocaster® configuration.

Now you can instantly transform your Stratocaster® into a Murray-approved beast with the Seymour Duncan Dave Murray Loaded Pickguard. Available in Pearloid, Black and White versions, each pickguard comes pre-loaded with the Hot Rails bridge and neck pickups plus a JB Jr. in the middle position, as well as high-quality Bourns volume and tone pots and a 5-way pickup selector switch, and it uses the 11-hole style which fits most post-1964 Stratocasters®. Each set comes personalized with special stickers as well as pickguard installation instructions.

"My Seymour Duncan pickups give me everything I need to get the maximum gain and versatility out of my guitar, but still with that classic Strat look,” Murray says. "The SD Hot Rails give a huge output on the neck and bridge, but without losing the clarity, and having the option of the lower output JB Jr. in the center gives a perfect option for clean tones. Drop this into your Strat and ENJOY!”

The Hot Rails are one of the highest-output and most sought after pickup sets available, with a strong ceramic magnet and powerful coil windings for thick sustain and a fat, full tone. The JB Jr. is a single coil-sized version of the humbucker that has been powering the tones of countless guitarists for almost four decades. These pickups are the same as those offered in the new Fender Dave Murray California Series Stratocaster®, and you can hear them once again in action on Iron Maiden's forthcoming double album, The Book Of Souls (out on September 4). The Dave Murray Loaded Pickguard joins the Made in America family of Seymour Duncan pickguards including the BYOP, Triple Rails, Classic, Antiquity, YJM and Everything Axe.