The Rolling Stones Live Concerts From The Vault 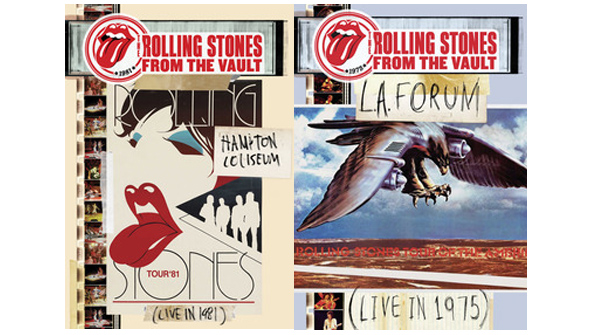 (PRESS RELEASE): Eagle Rock Entertainment are about to deliver a double dose of Rolling Stones this November, with the debut of the new series of live concerts: From The Vault.

Hampton Coliseum – Live In 1981 boasts a full-length 2 1/2 hour concert, featuring “Under My Thumb,” “Let’s Spend The Night Together,” “Shattered,” “Beast Of Burden,” “Tumbling Dice,” “Miss You,” “Brown Sugar,” “Jumping Jack Flash,” “(I Can’t Get No) Satisfaction,” and many more. The Rolling Stones American Tour in 1981, in support of the critical and commercial smash Tattoo You, was the most successful tour of that year, taking in a then record $50 million dollars in ticket sales. The 50-date tour kicked off in Philadelphia in September 1981 and ended with two dates in Hampton, Virginia on December 18 and 19. The show on December 18th, which was also Keith Richards’ birthday, was the first ever music concert to be broadcast on television as a pay-per-view event.

L.A. Forum – Live In 1975 also clocks in at 2 ½ hours, and features “Honky Tonk Women,” “Gimme Shelter,” “You Can’t Always Get What You Want,” “Tumbling Dice,” “Brown Sugar,” “Midnight Rambler,” “Jumpin’ Jack Flash,” and “Sympathy For The Devil,” to name a few. The Rolling Stones’ “Tour Of The Americas ‘75” was the band’s first tour with new guitarist Ronnie Wood. Even before the dates started, there were dramatic scenes in New York City at the official tour announcement, when the band unexpectedly turned up on a flatbed truck to play “Brown Sugar.” After a couple of low-key warm-up shows in Louisiana, the tour began on June 3, with a 44-date run lasting through August 8. They settled into the L.A. Forum for a five-night stint from July 9th to 13th. The L.A. Forum – 1975 film features the show from July 12th.

The electricity and power of the Rolling Stones onstage is a concert event like no other. From The Vaultperfectly captures two separate evenings that prove why a Rolling Stones concert is the ultimate live experience.

Click here to view a video of "Shattered" from Hampton Coliseum - Live In 1981 -https://www.youtube.com/watch?v=tj96Tau44OA