The Mule Does Reggae with Toots & The Maytals Founder Toots Hibbert 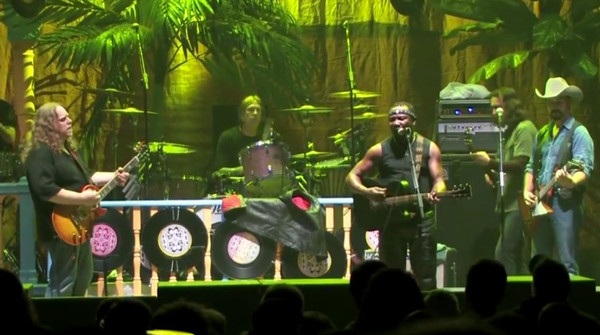 Rock torchbearers Gov’t Mule are celebrating their 20th anniversary with an extensive tour and a series of dynamic live archival releases that highlight the group’s versatility and epic, fearless live performances. No two Gov’t Mule shows are alike, as the band draws on the more than 300 songs in their repertoire (and often a host of special guests) to create a unique experience each and every time. Their steadily expanding fan base knows that the Mule always has something special waiting for them. Expect the unexpected.

The deep chemistry and steely confidence shared by the quartet allow them to tackle any form of music and stamp it their own while remaining true to the spirit and intent of the original. This can of course be heard any time guitarist-singer Warren Haynes, drummer Matt Abts, bassist Jorgen Carlsson and multi-instrumentalist Danny Louis take the stage, but a series of new live archival releases really drives the point home.

The third release in this series (after last December’s Dark Side of the Mule and January’s Sco-Mule) is Dub Side of the Mule, will be released on April 6, 2015, and shines a light on Mule’s fabled New Year’s Eve 2006 Beacon Theatre show in New York City. The show featured three-plus hours of Mule standards and covers, including a 60-minute set of reggae songs with special guest, reggae legend Toots Hibbert (founder of Toots & The Maytals). It also features blues standards long a part of their live repertoire (backed by a horn section and backing vocalists), plus special appearances by Gregg Allman & Friends and John Popper (from Blues Traveler). All 34 tracks have been remixed and mastered. This special release will be available in multiple configurations including a standard version (1-CD), a deluxe version (3-CD set of the entire 3-hour performance and one DVD of the Toots set) and a double vinyl version.

Dub Side Of The Mule