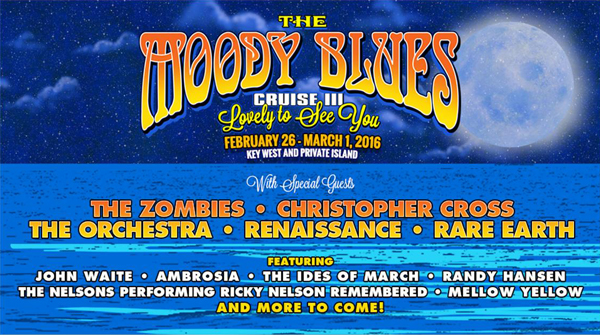 (PRESS RELEASE): One of the greatest rock bands of all time, The Moody Blues have announced the initial line-up for their third fan cruise experience--The Moody Blues Cruise III-departing from Miami, FL. on February 26, 2016 for four days and nights, visiting tropical ports including Key West, Florida and Great Stirrup Cay, Bahamas on the spectacular cruise ship, NCL Pearl. The band is very pleased to announce that they will be reunited with Moodies Cruise Alumni, The Zombies, The Orchestra, Ambrosia, Randy Hansen and Mellow Yellow.  As in past years, fans can expect multiple sets from these fan favorites as well as photo ops during the cruise.

The Moody Blues have also announced three new special guests aboard the 2016 sailing: Christopher Cross, Renaissance and Rare Earth. Christopher Cross made history in 1981, winning five Grammy Awards and became one of the decade's most successful performers. Renaissance, led by iconic vocalist Annie Haslam, brings their unique sound to the cruise with a fusion of folk, jazz, rock and classical influences.  Finally, Rare Earth will rock the Moodies Cruise with their top 40 hits from the '70s, including "Get Ready," "I Just Want To Celebrate" and many more.

Other classic performers confirmed include: John Waite, The Ides of March, Randy Hansen with the Music of Jimi Hendrix, plus Matthew and Gunnar Nelson performing Ricky Nelson Remembered, a special tribute to their legendary father. Fans will be treated to special performances at multiple venues aboard the NCL Pearl, showcasing these special guest artists with more artists to be announced.

Fans will have access to private concerts, Q&A sessions, Fan Jam and Karaoke Bar, special events and activities, while interacting with musical guests that influenced the music of the 70s/80s and beyond.  This is not just a "concert cruise." It is a fan experience celebrating years of incredible music by one of the world's most beloved bands, The Moody Blues.

The Moody Blues Cruise III provides a playground for the serious fan where music and luxury cruising hook up for a vacation of a lifetime. Tickets will be sold on a first-come, first-served basis and will only be available at MoodiesCruise.com.