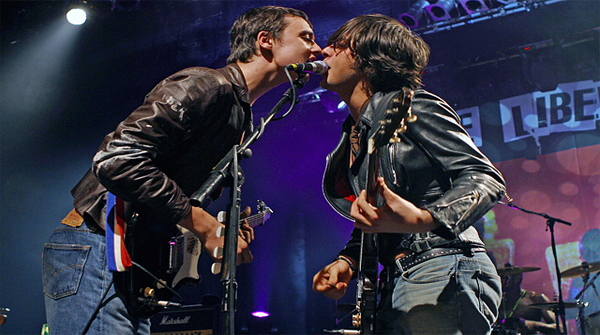 There could be new material on the way from The Libertines if therecent comments by the band's perplexing frontman, Pete Doherty aretrue.

The singer has revealed in a recent interview with online TVsource Hernu & Harris Unhinged that he has spoke with his longsuffering bandmate, Carl Barat about the idea, hesaid (via NME):

"I spoke to Carl yesterday and he's going to come out toParis. Then maybe we'll go back out to Thailand together and dosome writing."

Doherty added that he had been "enjoying" the delights of Parissince his return from a Drug Treatment centre in Thailand,adding:

"It's been three-and-a-half weeks since I've laid beside awoman in the biblical sense. It's been good for myhead."

The Libertines, who many believe were on the cuspof rock superstardom before Doherty's indulgencies spiralled out ofcontrol, reunited in 2010 for a series of small shows along withheadline slots at Reading & Leeds Festivals.