The Hammer Jammer for Guitar now in Full Production 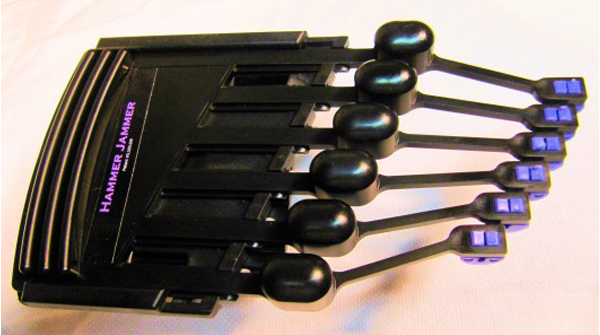 (PRESS RELEASE): After a two-year development period, the Hammer Jammer, a unique invention that changes the way a guitar is played, is now available and shipping worldwide.

First appearing as a prototype in a YouTube demo video in January, 2014, the Hammer Jammer became an instant sensation receiving hundreds of thousands of views in a matter of days. Although an early run of prototype samples sold out in a few weeks, development of the production product continued and today, the vastly improved and refined device is beginning to show up in brand new videos.

While all players will adapt to the Hammer Jammer differently, inventor and film composer, Ken McCaw, who conceived and developed the device says, “We’ve seen several players begin posting their own unique videos using the new Hammer Jammer, including Olivier Kikteff of France, who received his order in late May and posted his video less than 24 hours later.”

During its development period, the Hammer Jammer was proven to be a highly useful device for wounded soldiers and other players with limited finger flexibility. Because the Hammer Jammer is essentially a hybrid of keyboard and guitar, many keyboard players, who also have guitar abilities, are finding the marriage of the two instruments intriguing and useful.