The Gibson Guitars of B.B. King 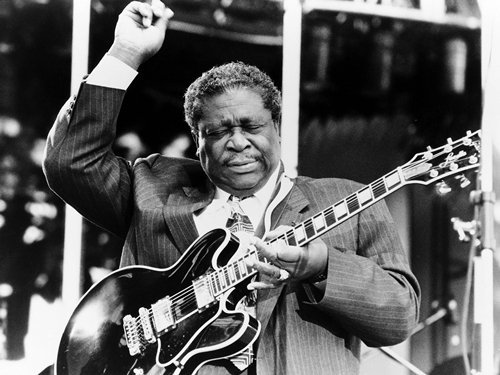 Gibson.com has posted a history of B.B. King's guitars with pictures, stories and videos. It's a nice insight into "Lucille" and her many guises...

I Love Lucille: The Gibson Guitars of B.B. King

Everyone knows B.B. King calls his Gibson guitars "Lucille." The fact is, B.B. has had numerous Lucilles since he fell in love with his first one way back in 1949. And he's played many other Gibsons that haven't been blessed with "her" name.

Here are the stories…

B.B.'s first "Lucille" was a Gibson L-30. He rescued it from a nightclub fire in Twist, Arkansas, and named it after a woman in the club. King told Jazzweekly.com, "One night, two guys started to fighting and one knocked down one of them containers [kerosene barrels, for heating the club] and it was already burning with kerosene and so when it spilled onto the floor, it looked like a river of fire and everybody started to run for the front door - including B.B. King.

"But when I got on the outside, I realized then that I had left my guitar on the inside. So I went back for it. The building was a wooden building and burning rapidly. It started to collapse around me and I almost lost my life trying to save my guitar. So the next morning, we found out that these two guys that were fighting were fighting about a lady that worked in the little dance hall. We learned that her name was Lucille. So I named the guitar Lucille to remind me to never do a thing like that again."

And so the Lucille legend was born. King's first Lucille was a Gibson L-30, a budget model. The L-30 was small-bodied, non-cutaway and with a flat back. The L-30 featured a simple trapeze tailpiece and pickguard, an adjustable bridge, single-binding (front and back) and dot fingerboard markers. Early examples were finished in black, but later L-30s had dark mahogany sides, back and neck, with a dark sunburst top. The model was discontinued in 1943.

As King's career flourished, he got a fancier guitar. Launched in 1949, the ES-5 was then one of Gibson's flashiest and sonically most versatile models - it had three P-90 pickups. King's was the early version, without the complex switching of the 1955-60 updates. The ES-5 came in blonde and sunburst, but B.B.'s was a blonde, with a trio of volume pots and a black pickguard. The ES-5 was discontinued in 1960.

In 1951, King had his major hit with a cover of Lowell Fulson's "Three O'Clock Blues." By this time B.B. was playing a Gibson ES-125. With a single P-90 pickup and no cutaway it featured a bound top and back, tortoiseshell pickguard, single-bound top and back and dot neck inlays. "Three O'Clock Blues" was a slow-burning 12-bar that set the template for B.B.'s inimitable style. No video in 1951, of course, so here King is playing the hit song on a later "Lucille"…

Electric blues pioneer T-Bone Walker was a big influence on B.B. T-Bone favored Gibson's ES-250, a mid-range hollowbody with two P-90s. In 1955, Gibson released the similar ES-350T and Byrdland, with slimmer bodies, better specs and a shorter scale length. The Byrdland was endorsed by jazz players Billy Byrd and Hank Garland - hence the name - and B.B. liked it. Its ebony fingerboard with block pearl inlays were smart, and its shorter scale made it perfect for complex jazz chording. Although B.B. toted a Byrdland for a while in the late '50s/early '60s, its most famous user remains "Motor City Madman" Ted Nugent. Who'da thunk B.B. and "The Nuge" had anything in common?

King has also used an ES-175. The guitar was a favorite of jazz legends Joe Pass and Herb Ellis, and King used his for his jazzier excursions. King is pictured with one on the 1959 album BB King Wails. The ES-175, unlike the top-line L-5 and Super 400, had a laminated maple (not solid carved spruce) top. This kept prices down and helped combat feedback.

The Gibson ES-355 is the "Lucille" everyone now associates with B.B. King. He'd played many budget-to-flagship Gibsons for many years, but the flash ES-355 was B.B.'s ultimate. A variation of the ES-335, the ES-355 had looks, volume, sweetness and stinging tone. It also boasted the 6-way Varitone selector, which offers a spread of sounds over and above the Gibson ES-335 norm. You can hear the "honk" of the Varitone's capabilities on King's 1969 classic "The Thrill is Gone." King has played ES-335s and ES-345s too, but the ES-355 was the one fit for a King… and the guitar became the queen of Lucilles.

It was 1980 when Gibson and King first collaborated to create his own, exclusive  Lucille model. As well as personalized pearl inlays, B.B. requested that Gibson remove the f-holes, to reduce feedback. In earlier years, King would often stuff his regular ES-355's f-holes with cloth to inhibit feedback, so this was a much-needed mod for the bluesman. As a Gibson Custom model, it is premium-priced. The  Gibson Lucille Limited offered different colors.

And the  Epiphone Lucille also offers a more affordable option. Featuring a laminated maple body with glued-in maple neck, it boasts a bound rosewood fingerboard and multi- bound body and headstock. With stereo and mono outputs plus the 6-way Varitone switch, it's classic B.B. on a budget.

Neither guitar comes with B.B's left hand - his vibrato technique is legend in the history of electric guitar - but the guitars may help you get that King tone. Soak up that B.B King tone in this tour de force.

To read more articles like this visit the Gibson lifestyle pages at www.gibson.com