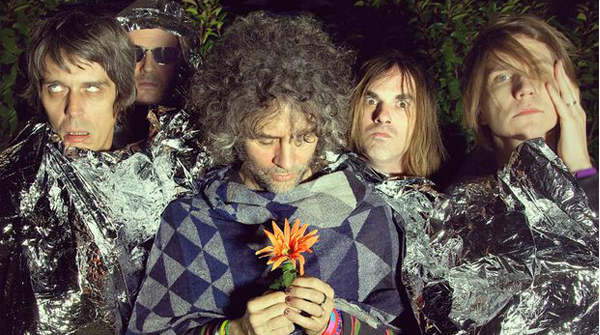 The ever-eccentric Flaming Lips have taken therather unprecedented step of releasing a stream of theirforthcoming album 'The Terror' that was recorded live during theirrecent SXSW festival show.

The Oklahoma noise-pop titans have uploaded the audio toSoundcloud and can be heard in full here.

'The Terror' is set for an April 1release through Bella Union.Frontman Wayne Coyne says that the albumrepresents the beginning of a new phase for the band.

"When we were making 'The Soft Bulletin' we didn't think aboutmaking it, we just followed a sound. That really means rejectingall these other sounds. You might not know what you like, but youknow what you hate. I think 'The Terror', in a sense, is the samething. I don't think people will look at like 'The Soft Bulletin',with whatever that means to people, but I think for us it feelslike we've self-destructed again, not in the same way but with thesame intensity. The minute we said: 'This is how we're gonna be asa band forever', absolutely the next second we were completelydifferent and utterly changed. I think we're onto probably thethird phase, the third version, of The Flaming Lips."

The Flaming Lips are set to perform two Londondates at TheRoundhouse venue to mark the album's release. The two Londonshows will take place on May 20 & 21 (2013).