The "Fifth Member of Led Zeppelin": The Authorized Bio of Peter Grant 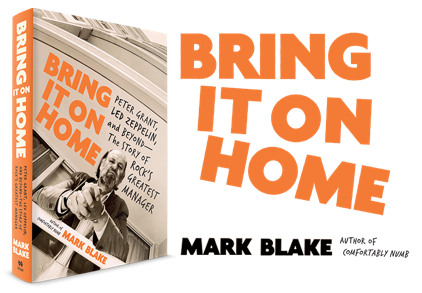 The "Fifth Member of Led Zeppelin": The Authorized Bio of Peter Grant

We are pleased to announce the publication of Bring It On Home: Peter Grant, Led Zeppelin, and Beyond—The Story of Rock’s Greatest Manager by Mark Blake, author of Comfortably Numb and Is This the Real Life?

Peter Grant is the most famous music manager of all time. Acknowledged as the "fifth member of Led Zeppelin," Grant also had a hand in the careers of Chuck Berry, Rod Stewart, Bad Company, Queen, the Rolling Stones, The Who, Guns N' Roses, and countless others, and his revolutionary approach to business—which included putting the band first—created a new industry standard that's still in effect today.

Grant’s story has appeared in fragments across countless Zeppelin biographies, but Bring It On Home is the first book to tell the complete and uncensored story of this brilliant and intuitive, yet flawed and sometimes dangerous industry giant. Armed with new interviews with Led Zeppelin’s surviving band members, support from Grant’s family, and access to scores of unpublished materials (including Grant’s never-before-published final interview), Blake sets out to not only shed new light on the history of Led Zeppelin, but also on the wider story of rock music in the '60s and '70s. Readers will find new details about the formation of Led Zeppelin, an unrevealed plot by Jamaican gangsters to kidnap the band members’ children, letters from police regarding threats made against the band by American Satanists, and much more.

On Sale 27th November 2018 from https://www.dacapopress.com/