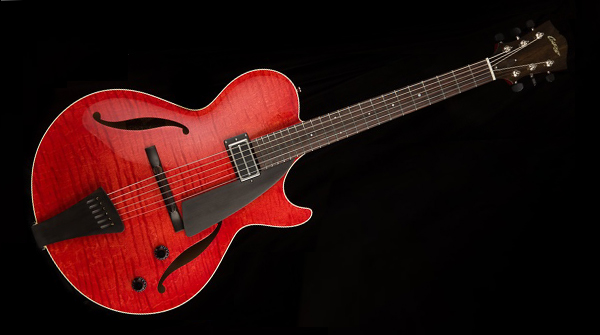 The Eastside LC Will Now Feature a Lollar CharlieChristian Pickup -

The Charlie Christian style single coil pickup was firstintroduced in 1936, making it among the first electric guitarpickup designs. It defined the early sounds of the electrifiedarchtop guitar through its use by the innovative jazz guitaristCharlie Christian, who became its namesake. Jason Lollar's newversion of the Charlie Christian humbucker route pickup features aradiused blade polepiece. This new design creates exceptionalstring response and balance on the Eastside LC. Although the LollarImperial humbucker that the Eastside LC has featured until now is acommon choice for this style of guitar, we have found that JasonLollar's Charlie Christian pickup imparts a beautiful, acousticallyfull and organic tone that completely fulfills our vision for thesonic potential of the Eastside LC.

The Lollar Charlie Christian style pickup used in the EastsideLC features a radiused single blade polepiece and fits into astandard sized humbucker route. It is constructed with traditionalbraided shield single conductor wire. The top surface is texturedsatin black. Both the humbucker-sized surround and the blade arenickel plated.