The Book of Triads Now Available For All Treble Clef Instruments 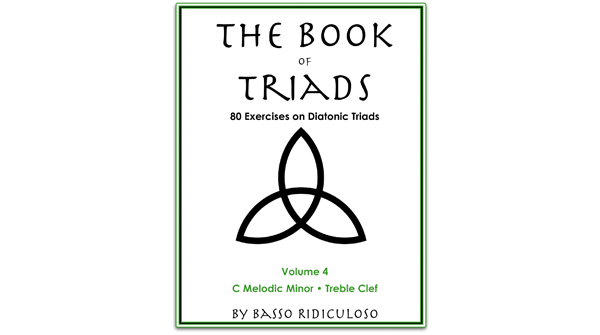 Basso Ridiculoso announces worldwide e-pub release of Volume 3 and 4 of "The Book of Triads" for immediate download on any IOS devices (Ipad, Iphone), Kindle, or desktop OS (Mac, Windows, Linux).

Each volume of the The Book of Triads contains 80 different exercises outlining all 7 diatonic triads in either C Major (Volume 3) or C Melodic Minor (Volume 4). The different exercises use triads over two octaves and are in root position, first inversion, second inversion, open voicing as well as retrograde and alternating note directions, all in varying combinations and permutations. With 80 different exercises, each volume is a complete tour through the possibilities of playing triads for any treble clef instrument including guitar, violin, alto/tenor sax, keyboard, or trumpet.

"The Book of Triads" contains standard treble clef notation and each chord tone (root, third or fifth) is labeled in every exercise.

"Triads get overlooked sometimes, especially in this world of extended chords containing altered 11ths and 13ths" says author Basso Ridiculoso. "But a lot of players that are considered to have a modern sound actually use triad-based techniques like triad pairs or hexatonics to get that modern sound. Any improvising musician no matter what style or instrument needs to have solid grasp of triads and all their permutations. The Book of Triads will get triads under your fingers and in your ears like no other collections of exercises does."

"The Book of Triads" can be viewed with free, open-source software such as Calibre ( http://calibre-ebook.com/) or Adobe Digital Editions for desktop machines, or with free built in e-pub readers on the Ipad and the IPhone. Kindle users can download the .mobi version of "The Book of Triads" via Amazon's WhisperNet directly to their device.

"The Book of Triads" is available for $9.99 US for immediate download here.