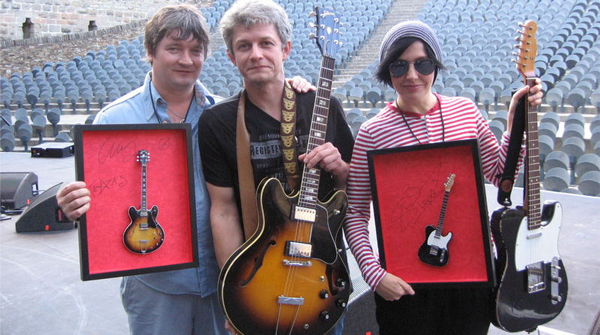 Texas and Red Sky July guitarist, All McErlaine, is in urgent need of some assistance from the guitar playing community, and music fans in general, to help locate a lost guitar of his.

The guitar in question is a 1970's Gibson ES 335 which was given to Ally when he first joined Texas back in 1988 aged 17. The Sunburst beauty has featured on every Texas album and on all of their tours.

The vintage guitar, which is valued at more than Â£3000, has a coil tap switch on the lower horn and has had the machine heads replaced with locking ones. It went missing backstage at a charity concert in Battersea Park in 2012 and has never been recovered.

'I didn't worry immediately as I was optimistically hoping that it would turn up'¦that someone would realise that they had picked it up by mistake and that it would make its way back to me. After all this time it still hasn't surfaced. It is priceless to me, I would love to find it so am hoping that someone will recognise it from the pictures and return it to me'