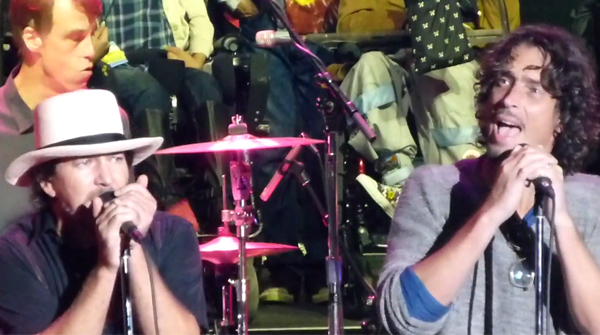 Members of proto-grunge outfit Temple of the Dog joined each other on stage this past weekend for the first day of the 28th Annual Bridge School Benefit concert.

Cornell, Vedder and co performed their classic 1991 single 'Hunger Strike', which reached Number Four in the US charts when released, as a tribute to the late Andrew Wood, frontman of iconic Seattle sound outfits Malfunkshun and Mother Love Bone

The charity show at in Mountain View, California marks the band's first live appearance together since September 2011, having previously reunited for live dates in 2003 and 2009.

Temple of the Dog formed in Seattle, Washington in 1990. It was conceived by vocalist Chris Cornell of Soundgarden as a tribute Andrew Wood. The line-up included Stone Gossard on rhythm guitar, Jeff Ament on bass guitar (both ex-members of Mother Love Bone & Green River), Mike McCready on lead guitar, Matt Cameron on drums, and Eddie Vedder providing some lead and backing vocals.