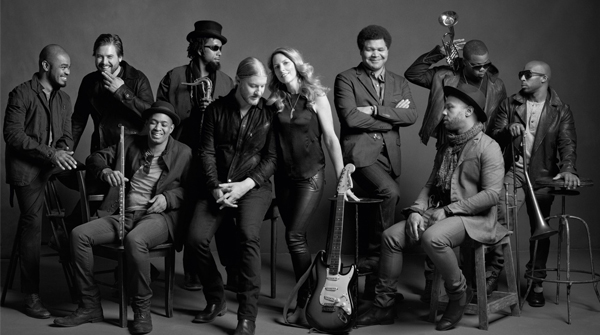 On March 17th 2017, Tedeschi Trucks Band will release their second live album and first ever concert film 'Live From The Fox Oakland' on Fantasy Records.

Filmed and recorded in a single night, September 9th 2016, at Oakland, CA’s Fox Theater, the concert film and audio were mixed using a vintage Neve console to achieve an exquisitely immersive sound experience, and mastering guru Bob Ludwig added his craft to the full 5.1 surround sound mix and album audio. The film was produced and directed by Jesse Lauter (Bob Dylan In The 80s: Volume One) and Grant James (Father John Misty) with Trucks continuing in his role as producer on all music elements.

'Live From The Fox Oakland' will be released in multiple formats including vinyl, DVD and Blu-ray. The collection includes cuts from Tedeschi Trucks Band’s 2016 album ‘Let Me Get By’ as well as TTB’s own interpretations of Leonard Cohen’s “Bird on the Wire” and Bobby “Blue” Bland’s “I Pity the Fool,” two songs which feature the full range and power of Tedeschi’s vocals. On Derek and the Dominos’ “Keep On Growing” it’s Trucks’ guitar work that grabs the spotlight for a stunning extended solo. Watch the full 10-minute powerhouse performance here: https://youtu.be/h0kXfPrHHcw. In another memorable segment, sarod master Alam Khan joins TTB onstage for the first time on their original song “These Walls.” This genre-defying moment reveals TTB’s classical Indian influences and proves the 12-piece ensemble can drop their sound down to a whisper when it serves the song.

Don’t Know What It Means
Keep On Growing
Bird On The Wire
Within You, Without You
Just As Strange
Crying Over You
Color Of The Blues
These Walls (featuring Alam Khan)
Leavin’ Trunk
I Pity The Fool
I Want More (Soul Sacrifice outro)
Let Me Get By
You Ain’t Going Nowhere