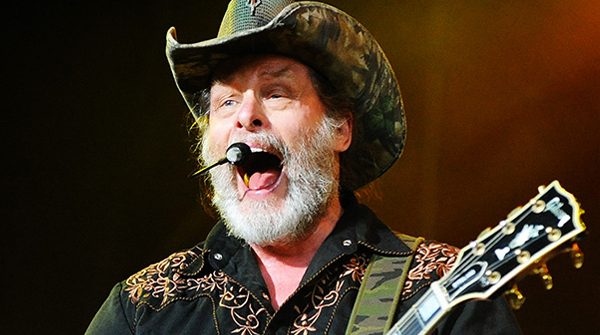 Ted Nugent has premiered the first single from his new album, 'Shut  Up & Jam', via Ultimate Classic Rock.

The multi-platinum guitar veteran has enlisted the services of former Van Halen and Chickenfoot vocalist, Sammy Hagar, for the new track, entitled 'She's Gone' which is due out on Tuesday 8th July on Frontiers Records.

'She's Gone' also features a special performance from one of the most respected drummers in rock, Johnny “Bee” Badanjek of the legendary Detroit band Mitch Ryder & The Detroit Wheels.

“My guitar has never gently weeped, but she does suckerpunch me mercilessly at regular intervals. ‘She's Gone’ is just another example of what we do together every day after I complete my ranch chores at home in Texas, and the MotorCity soulmusic slugfest erupts into spiritual love songs like this. Sammy Hagar said he wasn't interested in writing or singing any more pop songs, so he fell in love with this masterpiece jammout instantly. Clearly Sammy and I deserve each other. And she's gone.”

Hagar shares of his involvement on the track “She’s Gone”:

“When I first heard Ted's demo of this song, I immediately responded with ‘I'm in.’ Ted's ripping the guitar like the days of old…very inspiring to sing to a track like that—old-school blues riff, hard edged rock 'n roll on fire!!!”

To coincide with the release of' 'Shut  Up & Jam', Nugent has announced he’ll be heading out on the the road for a serious of dates across North America.