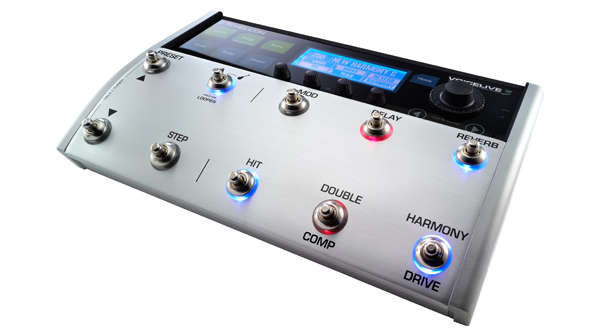 Since its launch in January VoiceLive 3 has quickly proven itself the ultimate 3-in-1-performance system for vocal processing, guitar FX and phrase looping, but innovation doesn't stop there. Today, TC-Helicon announces a new firmware update based on user comments and artist suggestions - improving several functions, including a wide variety of fixes, tweaks and upgrades. The biggest overall change is to the feel, accuracy and musicality of the onboard looper, which is destined to make a massive difference for live performance.

"Customer feedback over the last few months has been essential in helping us produce this update and we’re pleased to offer it. The response to the Beta versions we’ve posted has been hugely enthusiastic with users reporting vastly improved feel and a more rewarding overall looping experience. We went through 50 internal test versions to get it exactly how we wanted so, especially regarding the looper, it's a real game-changer." says Product Manager, Tom Lang.

* UI - Added "speedbump" detent to any parameter with symmetric values. *In english* If the parameter goes equal distances one way and the other, like Pan, it'll stop in the middle now. It makes it much easier to get "back to 0".

How To Get The Firmware

- Connect VoiceLive 3 to your computer using the supplied USB cable

- After the updates have downloaded, click on the Firmware tab

- Click on the topmost firmware version. It will likely say “New” next to it.

- Allow the update process to complete. DO NOT UNPLUG OR REBOOT YOUR UNIT!

- If anyone has trouble connecting to VoiceSupport, try the steps in this HELP FAQ